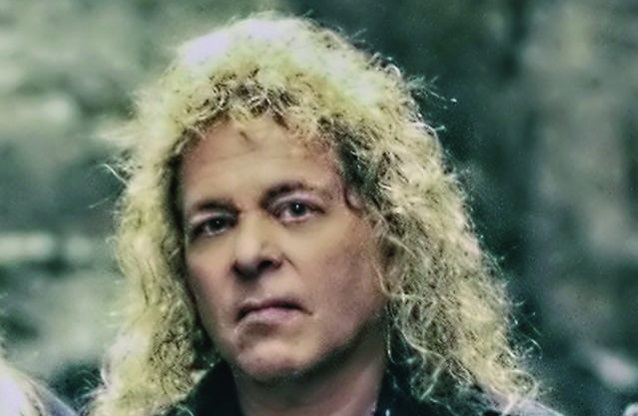 Mark Strigl and Mitch Lafon of the "Mark & Mitch Show" conducted an interview with Y&T frontman Dave Meniketti at this year's M3 Rock Festival at the Merriweather Post Pavilion in Columbia, Maryland. You can watch the entire chat below. A few excerpts follow (transcribed by BLABBERMOUTH.NET).

On the idea behind the band's recent "Acoustic Classix Vol. 1" EP:

Dave: "Actually, it was Aaron's [Leigh] idea, our bass player. Aaron had come to us because he has his own acoustic duo that he does shows all the time. He just thought, 'You know, we could be doing something really special by doing some acoustic versions of the classic songs.' As soon as he mentioned it, we all agreed, 'Let's give it a go.' One of the things I definitely wanted to do was some things that maybe you wouldn't expect us to do acoustically. That ended up, I think, probably, some of the better… Well, they're all good, they're especially special because they're not a song you'd expect to hear acoustically, but, because of that, you're getting this totally different skew on a song that you know only know too well being electrically played. The other good thing about acoustic is that you really hear the vocals. I think that's a cool thing for all of us. We've really been proud of our vocals and we get to bring that to the forefront."

On whether Y&T plans on issuing a volume two and three of acoustic EPs:

Dave: "Absolutely. We want to do more. We'll definitely want to do more because it was fun, and, obviously, it's always fun to do any recording project when the band gets together and has an equal say in what's happening and how we're going to put it together and that's what went down with this one. Once we got into the rehearsal studio a couple of days before we recorded it, to go 'Let's go through some songs to see which songs feel fun to play acoustically,' then, of course, the rhythm section gets to come up with all these different vibes behind it to make it special. Like, the bass line that Aaron plays for 'Black Tiger', for example, is just awesome. It brings this whole other thing to it. So, we can definitely say that we will look forward to doing another version of this. I don't know when it's going to be, but it's something we can put together pretty quickly."

On whether Y&T would ever consider doing a stripped-down acoustic tour:

Dave: "Probably not. [Laughs] Only because, you know, I think it'd be fun to maybe break it down in the middle of the set and have us do an acoustic thing, maybe a couple of songs. That could be a thing. But, going out and doing a whole tour acoustically, I would feel unfulfilled, let's put it that way, simply because the power and majesty of Y&T is really us plugged in and taking our heads off when we're playing. Not that I can't get into what I'm doing acoustically, but there's no other feeling like that to me."

On whether it is a goal for Y&T to ever release another studio album:

Dave: "Yes. It is. Y&T, we play 70, 80 shows a year. We're all over the place and when we get some time off, people are scattered, so, it's very difficult to even get us all together in the same room for one rehearsal when we have a month to do it. It's, like, 'Who's got time to be here at the same time?' But, we have to just get into the space where we say, 'Okay, we're not playing three months in a row. We need to get in and sit there and write together.' Because I want to write together. I do well on my own and coming up with ideas and stuff, too, but I want to see how we write together, especially now that we have Aaron in the band. I want to see what happens. We need to carve out the time to do that. I'm not the kind of guy who likes to write when I'm on the road. I'm way too busy. I'm either doing interviews, sleeping, soundchecks, driving or something, so, it's just not my thing. I would much rather be in a space where I just say, 'I'm in writing mode now.' Then, it all comes together for all of us, I think. We're obviously not fast on the draw in coming up with new stuff all the time. But, for what it's worth, we will do another one, absolutely."

Dave: "It's a non-stop memory event, just because everything about that, there was two days, everything about those two days, well, mostly the first day, was pretty monumental. I say that because you're getting together sort of the cream of the crop of the heavy metal and hard rock, whatever you want to call it at the time, bands and a lot of us knew each other because we played shows together and had met each other through the years. Sometimes there were people I'd never met and same with everyone else. So, it was a great, amazing time for all of us to get together and slap fives to each other and tell stories and just have this great camaraderie that was going on. Along with all of that, every hallway of A&M [Studios], because that's where they did it, was just jammed with musicians and press. So, everybody was getting interviewed. You could trip over something and fall into another interview and another and another. What was really cool was that when you got all of these musicians together in the big studio room A at A&M and they're standing there on the bleachers ready to sing this magnificent chorus, impossible, I would say, literally impossible to be able to get all of these musicians to shut up and just sing the freaking song, right? But, because Ronnie James Dio was standing in front of us, everybody had the respect and it was so fun and it was so cool to see that. After we disbanded from doing that, a lot of us would just go into the control room and watch different guitar players doing the solos. Wow, how fun was that to watch Yngwie [Malmsteen] just doing his thing. Just going, 'Wow, this is so fun!' George Lynch [DOKKEN], Yngwie, different people who were doing it at the time. It was unbelievable."