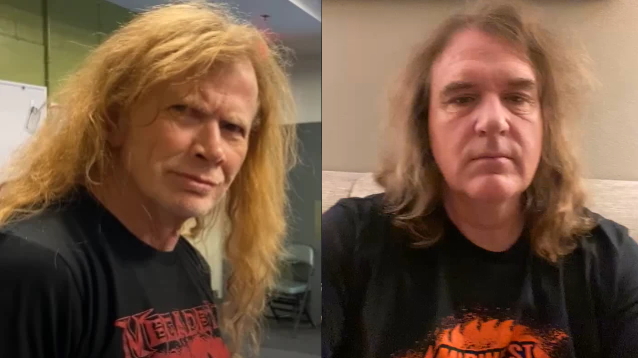 DAVE MUSTAINE Accuses DAVID ELLEFSON Of Trying To 'Poach' MEGADETH Song 'Kingmaker': 'It Was So Pathetic'

During an appearance on the latest episode of SiriusXM's "Trunk Nation L.A. Invasion", MEGADETH mainman Dave Mustaine spoke about the fact that the band's lead guitarist Kiko Loureiro received songwriting credit on eight of the 12 tracks that are featured on MEGADETH's new album, "The Sick, The Dying… And The Dead!".

"I came in on the record that [producer] Johnny K did — it was before 'Dystopia'; I think it was 'Super Collider' — I came in one morning and Johnny K was in there [working on] a song named 'Kingmaker'," Mustaine continued. "'Kingmaker' was done and I came in there, and I heard [then-MEGADETH bassist David] Ellefson and Johnny K in there recording a part at the beginning of the song. And it was nothing to do with the song; it had nothing… the riff wasn't in the record anywhere. And I came in and I said, 'What are you two doing?' [Makes sound of someone struggling to come up with the right words] You know, trying to explain, 'I'm gonna fucking poach your song and I'm going to put one of my riffs in front of the song.' And it was so pathetic. I just felt so sorry for the two of them. I just said, 'Go ahead. Leave it in there.' But if you listen to 'Kingmaker' tonight when you go home, you're gonna hear the beginning of the song, there's a really dumbass part in there. And that's it."

In a recent interview with the "Mike Nelson Show", Ellefson said that he "started sending ideas over" to Mustaine for "The Sick, The Dying… And The Dead!" during the early stages of the songwriting process for the LP but that Dave was "very resistant to 'em; he didn't wanna use 'em. So I was, like, 'Okay. That's fine. Whatever,'" Ellefson said.

David went on to say that the making of "The Sick, The Dying… And The Dead!" was "a bit of a journey. We finally had some collaboration on it, and I was okay with it either way. My mindset was, 'You know what? Just show up and play bass. Be that guy. That seemed to have worked, and just do that.' But there always seemed to kind of be rubs over that kind of stuff. So then I was, like, 'Look, I make other records. I have other creative outlets and things that I do.' So I was okay with that. If I didn't participate on a MEGADETH record, it was okay; I could do other things. And that was kind of how I found my peace with it."

Last month, Mustaine told the "Appetite For Distortion" podcast that "there is no set formula" for the songwriting process in MEGADETH. "It depends," he said. "With Kiko and Dirk [Verbeuren, drums] writing music for MEGADETH now, it's been a breath of fresh air to have songwriting approaches from other bandmembers now that is similar to MEGADETH music instead of getting music that wasn't MEGADETH music and having to try and make that work, and it doesn't."

Ellefson, who has lived in Scottsdale, Arizona since 1994, was fired from MEGADETH in May 2021, just days after sexually tinged messages and explicit video footage involving the bassist were posted on Twitter.

"The Sick, The Dying… And The Dead!" will be released on September 2 via UMe. Just months after TESTAMENT bassist Steve DiGiorgio recorded his parts for the effort, former MEGADETH bassist James LoMenzo rejoined the band in time for the summer 2021 leg of "The Metal Tour Of The Year".