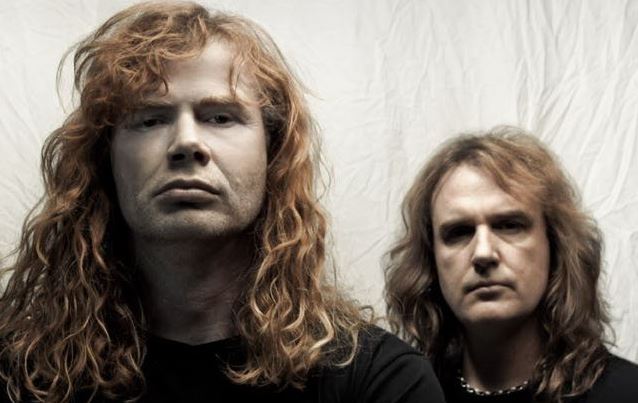 DAVE MUSTAINE And DAVID ELLEFSON Are The 'Root' Of MEGADETH

In a brand new interview with Australia's Hawkesbury Gazette, MEGADETH bassist David Ellefson spoke about his role in recreating the band's classic sound five years after he rejoined MEGADETH mainman Dave Mustaine to celebrate the 20th anniversary of the group's "Rust In Peace" album.

"I feel it when me and Dave get in a room and put the guitars on," Ellefson said. "It's, like, 'Dude, we are right back.' Those roles were created in 1983 when we formed that band. I think that when he and I get back in the room together, you can feel that, 'God this is the root of MEGADETH right here."

He continued: "Other guitar players and drummers have come and gone and they've certainly affected the sound of the band — I'd like to think for the most part positively and constructively — but that core sound... I noticed it the day that I came back and jammed with Dave and Shawn [Drover, drums] and Chris [Broderick, guitar] in February 2010, when I rejoined the group. As soon as we played 'Symphony Of Destruction', it was, like, 'Yep, there it is,' and then it was, 'Yep, let's go do this thing.' And here we are five years later, still rocking."

According to Ellefson, MEGADETH's longevity can be attributed at least in part to the strong musical vision he and Mustaine developed at the band's inception and have remained true to ever since.

"MEGADETH is one of those bands," Ellefson said. "When I first met Dave, we formulated it before we formed it, meaning we really talked about everything; discussed it. It was a planned mission. It was like going to war. We didn't just walk in and start shooting some bullets and see if we hit anything... This was a very, 'walk-in-and-take-over-the-beach'-type plan. And that's how the band has been run since day one. Everything is intentional. Nothing is by accident. Granted, cool things come out of that.

"A lot of bands form in the garage or by jamming in clubs playing some tunes and then they find their way, but MEGADETH was a much more deliberate approach and it's cool.

"As we were forming it, it felt like some mightier power above us was calling the shots and directing it, and I don't mean that to sound necessarily religious, but you can tell when you're involved in things that are meant to be big... This felt like that.

"I've been in bands that were great bands that never went anywhere and I've been in a band that really went some place and it's a great thing to be a part of."

MEGADETH announced on April 2 that Brazilian guitarist Kiko Loureiro, best known for his work with ANGRA, has joined the Dave Mustaine-led group as the replacement for Chris Broderick.

In addition to Mustaine, Ellefson and Loureiro, the recording lineup for MEGADETH's forthcoming album will include LAMB OF GOD drummer Chris Adler.