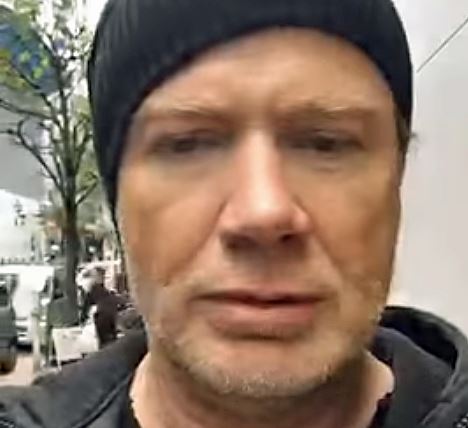 Dave Mustaine went lingerie shopping with his wife in Tokyo, Japan prior to hosting this week's Classic Rock Roll Of Honour. The MEGADETH mainman shared video footage of the experience via his Periscope account.

The Classic Rock Roll Of Honour awards show takes place at Ryogoku Kokugikan Stadium in Tokyo, Japan on November 11 — the first time the event has been held in Japan.

On his stint as the host of the event, Mustaine said: "It is my distinct honour to host the Classic Rock Awards this year, and even more honorable to host it for the great people of Japan.

Jeff Beck will be given the highest honours on the night and he has announced that he will be assembling his own special band of musicians for the event. Beck's band includes an all-star cast featuring the brothers Dean and Robert DeLeo of STONE TEMPLE PILOTS on guitar and bass. He will also be joined by Alice Cooper guitarist Tommy Henriksen and KORN drummer Ray Luzier.

Sadly, it has also been announced that METALLICA guitarist Kirk Hammett will not be able to attend the event as planned.

Hammett said: "I'm afraid I have to tell you with heavy heart that I won't be able to make the Classic Rock Awards this year.

"As you know, the following week is the new METALLICA album release and we are busy with press and rehearsals. I'm hoping to be in Japan soon, so until then, have a great night with one of my all time heroes Jeff Beck and the stellar lineup for this years Classic Rock Awards!"