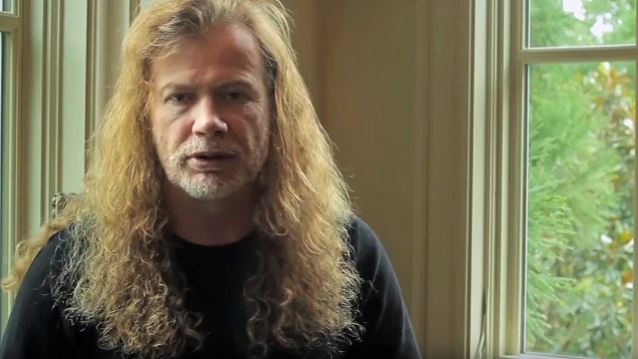 DAVE MUSTAINE Is 'Frightened' By U.S. Presidential Candidates: 'I Know There's Better People Out There'

MEGADETH mainman Dave Mustaine has refused to publicly throw his support behind any candidate in the U.S. presidential race, saying that his previous comments about a presidential candidate were misconstrued.

Mustaine made headlines in early 2012 when he voiced his support for ultraconservative Republican presidential candidate Rick Santorum. He explained at the time that the Pennsylvania politician looked "like he could be a really cool president… kind of like a JFK kind of guy." He also expressed admiration for Santorum over the fact that the former senator left the campaign trail to spend time with his ailing daughter.

In a brand new interview with Brazil's Wikimetal, Mustaine was asked for his thoughts on the 2016 U.S. presidential race. He responded: "The last time I said something about politics and the election, there was a guy that had a sick daughter… She was really sick; she had a very, very bad disease. Not like the flu. I mean, like a birth-defect thing. And he had to leave the campaign. And I just said I thought that was cool. And then all these assholes in the press up here in the States said that I endorsed the guy. I never did. Didn't even know him. Never met him, never spoke to him… nothing. [I] just [knew that] he had a sick daughter, he split, and I went, 'Oh, that's cool,' 'cause I'm a dad."

He continued: "So I am not gonna say who I think would be a good president. [But] I have to tell you, looking at all the people that are running for the presidency of the United States, it frightens me. It does, because there doesn't seem to be anybody that really has a lot of experience having the keys to the nuclear football. And I know there's better people out there. Like, you look at these people who run these huge organizations and stuff like that that are really good people. You look back in the history of the United States, like the [people that wrote the] Declaration Of Independence, all those guys, they weren't career politicians; they were doctors and preachers and stuff like that. They were people from their town that other people respected; they weren't dudes that got into power and did promises for everybody and it was just one big circle jerk."

Mustaine went on to say that he remained optimistic about the world's future, even if some problems persist, such as poverty, pollution, hunger and violent conflicts.

Mustaine made headlines in early 2012 when he suggested onstage at a concert in Singapore that President Obama was behind the mass shootings in Aurora and at a Sikh temple in Wisconsin.

Mustaine later blamed media outlets for taking his statements out of context, explaining that was merely repeating the theories of Larry Pratt, a pro-gun activist who runs the organization Gun Owners Of America.