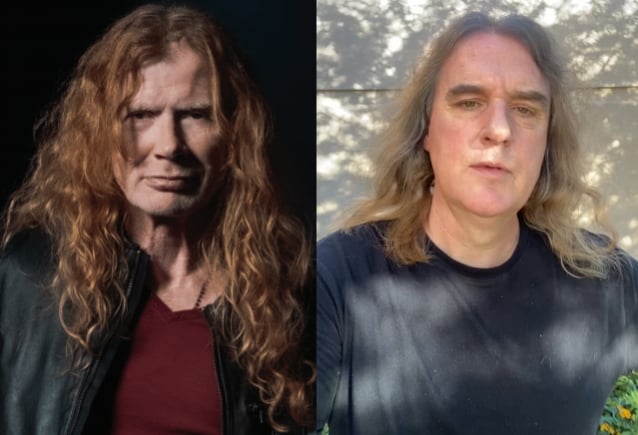 DAVE MUSTAINE Once Again Says DAVID ELLEFSON Is Not A Founding Member Of MEGADETH: 'I Was The Founder'

Dave Mustaine has once again said that he is the sole founding member of MEGADETH. The guitarist/vocalist made the comment in an interview with LifeMinute to promote the band's new album, "The Sick, The Dying... And The Dead!". While discussing the MEGADETH "sound", the 61-year-old musician said: "There's a misnomer that there were two people that founded MEGADETH. I was the founder; I was the only one in the beginning. There was a bass player before who just was… who just left. So it's been my vision. When I got kicked out of METALLICA, I got kicked out of METALLICA; no one else was with me on the bus coming home."

Bassist David Ellefson was in MEGADETH from the band's inception in 1983 to 2002, when the group briefly broke up because Mustaine suffered severe nerve damage that left him unable to play. After Mustaine reformed MEGADETH with an all-new lineup in 2004, Ellefson sued his former bandmate for $18.5 million, alleging that Mustaine still owed him substantial merchandise and publishing royalties. In January 2005, the case was dismissed in court, and five years later, Ellefson rejoined MEGADETH.

Mustaine's latest comments come nearly seven years after he implied in an interview with the Cape Girardeau, Missouri radio station Real Rock 99.3 that Ellefson was not a founding member of the band because, he said, "MEGADETH was already in its formative phase long before I even knew David Ellefson." Ellefson later said that he was "technically" a founding member of MEGADETH because he was "in the room" the day MEGADETH decided to change its name from the previous working moniker of FALLEN ANGEL at the suggestion of the band's then-guitarist Greg Handevidt.

In February 2016, just a month after his original remarks were published on BLABBERMOUTH.NET, Mustaine was asked by Ticketmaster what it means to have a longtime collaborator like Ellefson back in the band after so many lineup changes. He responded: "David and I have been friends for a long time, even during the lawsuit. I had made it clear that I loved him, and I loved his family. I said that the truth would come out and that it was very unfortunate. The lawsuit was dismissed, I forgave him, and we got back in business again. It's been fun ever since."

He continued: "There's a couple web sites out there that don't like me and they're trying to twist some of my words around about David Ellefson being in the band or not being in the band, or being a founding member or not being a founding member. And that shit don't matter, because it's a gossip web site. The truth is, me and Dave are partners, we make good music together, he's in MEGADETH, we're going on tour. Hopefully people will know when they see him on stage and not think he's somebody else. [Laughs]"

In February 2016, Ellefson was asked by Cranked Up Live about Mustaine's comments to Real Rock 99.3 where the MEGADETH leader implied that Ellefson was not a founding member of the band. Ellefson said: "Well, it's interesting… Yeah, I did see [the article on BLABBERMOUTH.NET]. And it's interesting. The headline was very misleading and was obviously meant… It was very inflammatory. It was meant to be a hamburger bomb thrown over into the middle of our campaign. And I think I saw it as that. So, again, open the story, read it. They didn't even say that. They didn't even say what the headline says. That headline was misconstrued.

"Now, look, when Dave came home from METALLICA, he had another bass player, kind of a kid he was almost teaching how to play bass, and another guitar player he had been working with a little bit, and a singer, named Lor. And those were kind of the first people that, I think, in April and May of 1983 that Dave was just kicking some ideas around [with], seeing if he could get anything going. But the day me and my friend Greg Handevidt knocked on Dave's door and asked him where to buy some cigarettes and beer, that was the day that there was a unity that moved forward, because me, Greg, Dave, that singer Lor and our drummer Dijon Carruthers, who helped create a lot of the lyrics and the concept of 'Black Friday' on the 'Peace Sells' record, that was… we were the group that were rehearsing for a few weeks, working on these new songs Dave was writing. And one day we came back to… I think it was me and Greg's apartment… And it was Greg who suggested… We were talking about band names, and Greg suggested… There was a name kicking around, FALLEN ANGEL, that I think Dave… That was kind of working title that he had. But he had a song called 'Megadeth', which was later retitled to become 'Set The World Afire'. And it was my friend Greg who suggested, 'I think we should call the band MEGADETH.' And it was decided that day, so, I mean, technically, whoever was in the room that day was a founding member of MEGADETH. And, again, I don't know why there has to be so much importance on that. I know, I was there. And quickly, all those other members either scattered or were let go, and within a month or so, it was me and Dave standing next to each other — Dave and Dave of this new group called MEGADETH."

Ellefson was fired from MEGADETH in May 2021, just days after sexually tinged messages and explicit video footage involving the bassist were posted on Twitter.