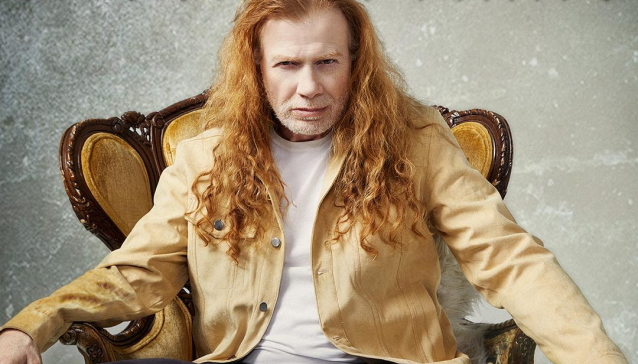 In a recent interview with Classic Rock magazine, MEGADETH leader Dave Mustaine was asked about a comment he made in his 2010 autobiography, "Mustaine: A Heavy Metal Memoir", where he referred to himself as "the leader of the band" when he was in METALLICA in the early 1980s. After the interviewer, Paul Elliott, said that the statement was "a bit strange" because the guys who founded that band, James Hetfield and Lars Ulrich, are "such alpha males," Mustaine replied: "Oh no. I am clearly the alpha male between the three of us. Why did I have to do everything when I was in the band? Why did they always ask me talk to the promoters and collect the cash? Why was I the one who had to do the fighting? Why did I have to talk in between songs?"

Mustaine went on to say that it's not difficult for him to talk about METALLICA. "I really don't give a fuck," he insisted. "And you know what? I love those guys. I sent a text message to James just a couple of days ago after he'd said that he was insecure about his playing. I said: 'James, I love you and I really like your playing.' He didn't answer. Of course not. Why would he? The point is I wanted him to know that I've had those feelings too, but I don't now.

"I must remind you that when I joined METALLICA, James did not play guitar. He just picked it up and started playing when I was in the band. But let's be honest, James is one of the best metal guitar players in the world. So for him to have those feelings, that's a lie, because he's a mind-blowingly talented guy. So I just felt I needed to say something to him. I didn't tweet it. I didn't want anybody to know what I said. But I'm telling you because, hey, you brought it up."

Last month, Mustaine reflected on his 1983 dismissal from METALLICA and the formation of MEGADETH while speaking to podcaster Joe Rogan of "The Joe Rogan Experience". When asked if went "right into" MEGADETH after his exit from METALLICA or if it took him some time to plot his next move, Dave said: "I think in my mind I went right into MEGADETH, but at the time I was still kind of trying to digest everything that took place.

"The thing that bothered me the most was I had all my music, and I left it behind and I said, 'Don't use my music.' And of course they did. They used it on the first record [1983's 'Kill 'Em All'], on the second record [1984's 'Ride The Lightning']. There's parts of my music on a song on the third record [1986's 'Master Of Puppets']. All the solos on the first record are mine, except that they're just performed by Kirk [Hammett, METALLICA's current guitarist]. And [they're] close but not the same. And he's not a bad guitar player."

When asked if he got royalties for that, Mustaine said: "Well, most of 'em, yeah, but Kirk got my royalties for [the song] 'Metal Militia' [from 'Kill 'Em All'] for many, many years. And he has to see the check, so I know somebody saw that I wasn't getting paid.

After Rogan noted that Mustaine feels both "sadness and bitterness" over his departure from METALLICA, Dave said: "Not bitterness — I'm over it. It's just money. At the end of the day, my happiness and my family and my wife and my children are more important to me than anything in this world. I love our fans. I have so many things in this life that I'm happy about. But, man, it's my family. And obviously my relationship with God. I take that very, very personal. And I don't talk to people about it; I don't push it on 'em at all. It's my thing. And I just look at it like where I'm at right now… Yeah, [I was] 20 [years old] in METALLICA, and now, look at me, I'm 60 [years old] in MEGADETH. And I'm a Grammy winner. I'm a New York Times best-selling author — all these things."

Back in 2016, Hammett told the "Word Of Wheeler" podcast that he understood Dave's continued resentment toward his former bandmates over the way he was dismissed from the group. "I've always seen Dave as someone who was just really, really sad, really angry, really frustrated about his situation with METALLICA, and he never could let that go," he said. "And, you know, I've always shown a lot of empathy for him, understanding that he was just pissed off. It's the equivalent of the woman of your life leaving you. I mean, really. When your band kicks you out… I've never been kicked out, but I can imagine it's a horrible experience, especially if it's a band that you feel really passionately about. So I can understand Dave's plight over all these years. But I will also say that when we did these 30th-anniversary shows at the Fillmore [in San Francisco], and we invited Dave to play on all those 'Kill 'Em All' songs, man, it felt so good to have him playing on stage. It felt perfectly fine for me to, while Dave was playing the guitar solos, for me to go over to James and play the rhythm parts with James, and it wasn't a big deal at all. And I could see from the look on Dave's face and just from his whole attitude that it was super-cathartic for him. And I could see how it was helping him. And so I just took it all in stride. And it's interesting, because since then, I think, Dave's relationship with us is a little bit better now. I'd like to think that that whole thing just kind of healed some scars that needed to be healed."