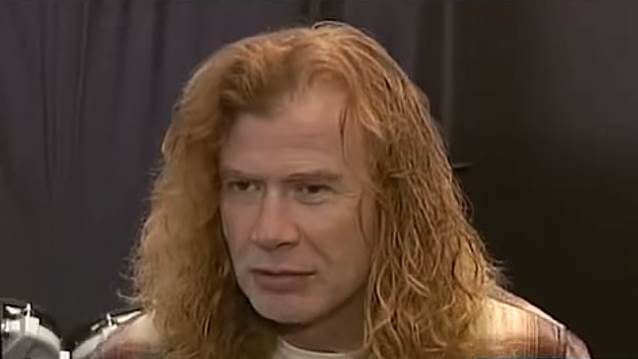 MEGADETH mainman Dave Mustaine says that the band's upcoming fifteenth album, "Dystopia", has the "excitement" that was present during the recording sessions for MEGADETH's classic sophomore LP, "Peace Sells... But Who's Buying?"

"Dystopia" will be released on January 22, 2016. The follow-up to 2013's "Super Collider" marks the recording debut of MEGADETH's new lineup, which includes Brazilian guitarist Kiko Loureiro, best known for his work with ANGRA, and LAMB OF GOD drummer Chris Adler.

Speaking to Australia's Heavy magazine, Mustaine stated about "Dystopia": "I'm so happy with it, brother. It reminds me of when we recorded 'Peace Sells…' because it has that excitement. There are some songs on there that are melodic; I think that when you learn how to play heavy metal and bring melody to it then that's a huge accomplishment. Most guys, when they play metal, they've got a really fast right hand but their left hand isn't really that melodic. Once you've found the secret on how to write melody with metal, well, then you've got it. This new lineup has a really cool, honest and organic feel to it."

He continued: "It's easy to say that it's going to be heavier than 'Super Collider' was; I've always made whatever I'm singing or writing about musically as an example of what I'm going through personally. I lost my mother-in-law to Alzheimer's last year and just because a person died in October when the record was done doesn't mean she wasn't slowly dying for many, many months before that. I haven't had a lot of people close to me die. I've known a lot them but nothing as personal as inside my family. So when she died, that really fucked my head up, which led to the songs being dark, somber and melancholy."

Mustaine also talked about the inspiration behind the new MEGADETH album title. He said: "I've had this outlook for a long time that the world is a really good place with some bad people in it. Others might think the opposite. But I think if you were to take a consensus of people, they know the difference between right and wrong. People have manners and morals but lately there's been a decline in how people treat one another. That's where 'Dystopia' comes in, and if people don't start loving each other and helping those in need then when that becomes more important than power, fame or money then I think we're going to be okay."