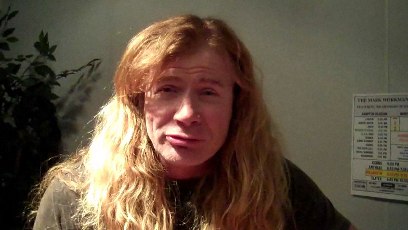 DAVE MUSTAINE: 'They're Taking God Out Of The Schools To Dumb Us Down'

Eric Spitznagel of MTV Hive recently conducted an interview with MEGADETH mainman Dave Mustaine. A couple of excerpts from the chat follow below.

MTV Hive: Do you consider yourself an optimist? Are you looking ahead to 2012 and thinking, “This year's gonna rock?”

Mustaine: I think 2012 is going to be fine for me in some circumstances, but I think it's going to be really horrible for our country.

MTV Hive: How so?

Mustaine: Everything is pretty shitty right now, with the eradication of the middle class, and we've got an attorney general who won't come clean about the Fast and Furious stuff. I think that we're headed for a lot of trouble. We've got an incredible debt, which is just continuing to get higher and higher. We need jobs right now, man. We don't need any more Washington deals, we need jobs. There are so many things wrong with this current administration.

MTV Hive: If you could give one piece of advice to Obama, what would it be?

Mustaine: To me, a president should be the one who steps up to the plate and says, "Knock it off."

MTV Hive: Maybe he should consider using that as his election slogan instead of "Yes We Can."

Mustaine: That's not a bad idea.

Mustaine: Yeah, I still don't think I'd believe him. I always thought Colin Powell would make a great president, but he doesn't want anything to do with politics anymore. I can't say I blame him. Given our choices for president, I think next year is going to be just terrible.

MTV Hive: Rick Perry claimed in a recent campaign ad that there's a war on Christianity. As an intelligent, seemingly non-crazy Christian, do you agree with him?

Mustaine: I think there's enough evidence that shows there is some effort being made toward controlling religion.

MTV Hive: Could you give me an example?

Mustaine: It's pretty clear that they're taking prayer out of school. It's been happening for a very long time. The very first schoolbook that was written had God all over it. I collect books and I have some really, really old schoolbooks, and God is mentioned on every single page. They're taking God out of the schools to dumb us down.

MTV Hive: I'm almost positive they're trying to have the opposite effect.

Mustaine: It's not just in the schools. There are a lot of people being persecuted for what they believe in. There was that girl who was fired from a Macy's in Texas because she didn't let some cross-dressing dude into the woman's dressing room. Come on! Are you out of your mind, Macy's?