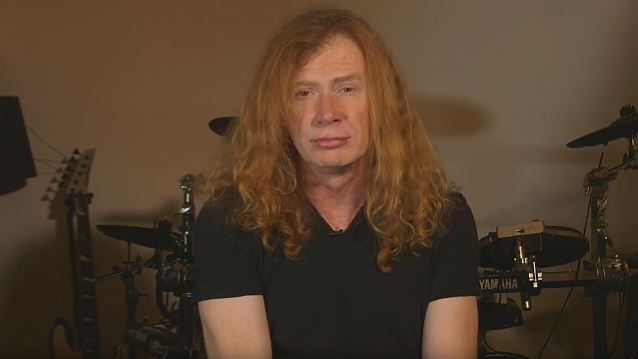 DAVE MUSTAINE: Why MEGADETH Has Canceled Its Fan Meet-And-Greets

MEGADETH has canceled all of its previously scheduled meet-and-greets on the European leg of the "Dystopia" tour, effective June 29.

In a video message posted on Periscope earlier today (Saturday, July 2),MEGADETH mainman Dave Mustaine explained why the band decided to scrap the special fan packages. "We were doing meet-and-greets with [a] company, and they did not send a representative over here to Europe with us, and we're supposed to be doing this right," he said. "And since the meet-and-greets are not up to par, that I believe you deserve, and I believe that it should be done really, really cool, like we used to do it, they've been canceled. We told them several days ago that we canceled them."

He continued: "It just goes to show you… I'm in Israel right now, and people are saying, 'Where are you? Where's the meet-and-greet?' Evidently they never told anybody. So I'm sorry that these guys did not inform you. I'm hoping that this is not true, but we're gonna get to the bottom of it. And until this is done right and done the way that I believe that you deserve, which is the most kick-ass fucking time you can possibly ever have, then you know what? I'm just gonna have to… just wait until I can hang out with you guys in person."

Mustaine added: "It's a bummer. [David] Ellefson's [bass] pissed, Kiko's [Loureiro, guitar] pissed, Dirk's [Verbeuren, drums] pissed, we're all pissed. This is part of the time when we get to talk with you guys and hang out."

MEGADETH played its first show with Verbeuren on May 20 at the Rock On The Range festival in Columbus, Ohio.

He was recruited to play drums for the band while Chris Adler is busy touring with LAMB OF GOD.

MEGADETH filmed a video for the song "Post American World" late last month. The track is taken from the band's latest album, "Dystopia", which came out in January.