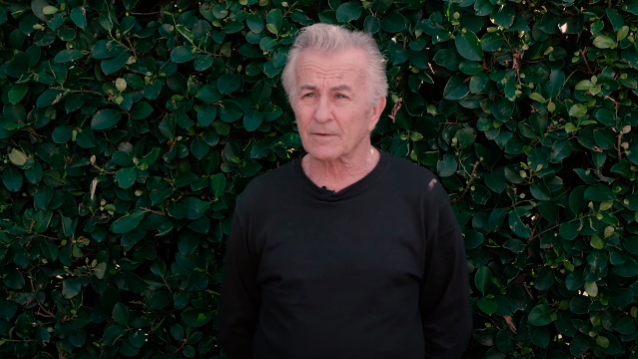 Lee Ving, frontman for the legendary punk band FEAR, revealed on Monday's episode of "The 80its" podcast that he has not heard from Dave Mustaine since the MEGADETH leader replaced Ving's vocals and harmonica on the pair's only collaboration.

In 1996, Ving and Mustaine released "The Craving", the sole album from the duo's side project MD.45. That version included vocals and harmonica by Ving. In 2004, Mustaine reworked the album, replacing Ving's tracks with his own. In Mustaine's 2011 autobiography, "Mustaine: A Heavy Metal Memoir", he stated the change was "an effort to entice interest from MEGADETH fans who might have overlooked the original."

"The Craving", was a critically panned affair that featured a musical style once described by Mustaine as "the New Wave of British Heavy Metal crossed with a punk singer, and whatever influences the two of us have melted into one."

Regarding the 2004 re-release, Ving told the hosts of "The 80its" that it was done "without any notification or preparation, like notifying the guy who sang it first." When asked if Mustaine had contacted him since, Ving said that Mustaine had "not reached out in practically any way."

But Ving would like some closure to the matter. "In fact," Ving said of Mustaine, "if I knew how to call him, I would, just to get pressure off the matter. And we could be what friends we could be."

The podcast episode is available on Apple Podcasts, Pandora and wherever podcasts are found. A video of the interview, which was conducted via Zoom, will be available on "The 80its" Facebook page later this week.

"The 80its" (a portmanteau of 80s and idiots) is a weekly podcast that bills itself as an "objective defense of 1980s pop culture." First launched in June 2019, it is co-hosted by Will Padilla and Ray Sexton. On each episode, the hosts provide information and share experiences regarding a particular pop culture topic. Additionally, they often interview 1980s icons and other experts in an effort to prove "objectively" the importance of 1980s media.