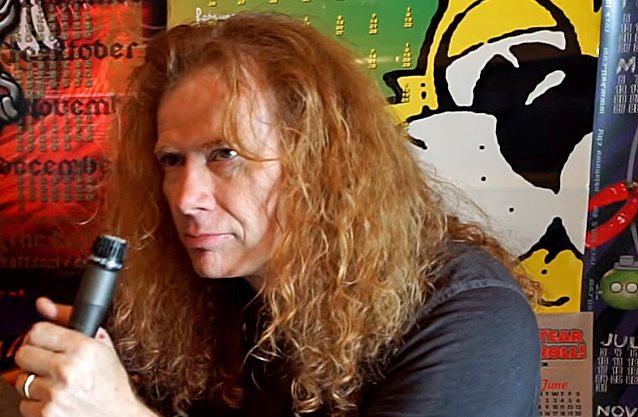 Turbo of the Rock 100.5 The KATT radio station conducted an interview with MEGADETH mainman Dave Mustaine at this year's Rocklahoma festival, which was held May 27-29 at Catch The Fever Festival Grounds in Pryor, Oklahoma, just outside Tulsa. You can now watch the chat below.

Speaking about the upcoming U.S. presidential election, Mustaine said: "If you wanna know how things are gonna look, it's gonna be real simple to boil it down. If you wanna know what being with Bernie Sanders [as president] would look like, look at Venezuela. If you wanna know what being with Hillary Clinton [as president] would look like, it'll be more of the same. If you don't want either one of those things, the other choice is gonna be Donald Trump. Now, I think that because of the fact that Hillary may be going… [she] may be unable to run for office because of her criminal proceedings that look like they're gonna take place, it looks like the Democratic party is getting some people ready, like, in the back. You hear rumblings [of] Jennifer Warren [sic] and Joe Biden still kind of hovering around and stuff like that. And the same thing is, like, why did Mitt Romney all of a sudden start talking up again. I mean, he's more outgoing right now against Donald Trump than he was against Barack Obama."

He added: "I believe we're right on the cusp where something super fantastic is gonna happen in our nation right now. I think that this election is gonna have explosive repercussions one way or the other, and if it doesn't go the right way, America is gonna be in a lot of trouble. But everybody needs to remember this number: it's article 25." [Apparently referring to The Twenty-fifth Amendment (Amendment XXV) to the United States Constitution, which deals with succession to the Presidency and establishes procedures both for filling a vacancy in the office of the Vice President, as well as responding to Presidential disabilities.]

Mustaine made headlines in early 2012 when he voiced his support for ultraconservative Republican presidential candidate Rick Santorum. He explained at the time that the Pennsylvania politician looked "like he could be a really cool president… kind of like a JFK kind of guy." That same year, he drew ire on social media when he suggested onstage at a concert in Singapore that President Obama was behind the mass shootings in Aurora and at a Sikh temple in Wisconsin.

Mustaine later blamed media outlets for taking his statements out of context, explaining that never said he officially "endorsed" Santorum. As for the Singapore concert, he claimed to have been repeating the theories of Larry Pratt, a pro-gun activist who runs the organization Gun Owners Of America.