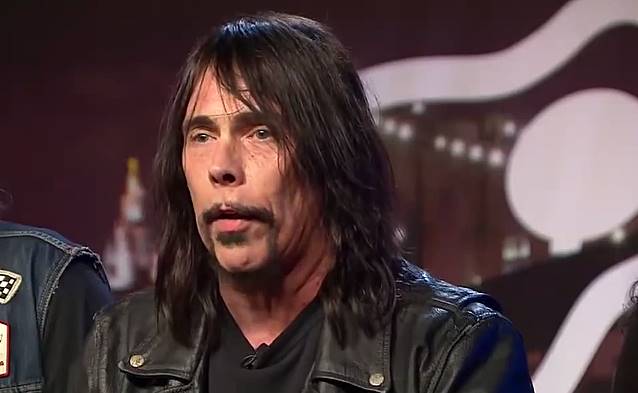 Rei Nishimoto of Ghost Cult magazine recently conducted an interview with Dave Wyndorf of MONSTER MAGNET. A couple of excerpts from the chat follow below.

On why MONSTER MAGNET took such a long break from touring the U.S.:

Wyndorf: "It was kind of on purpose. About ten years ago, I got off of a major label in the States. We were on A&M and it got sold, and in the new age, a lot of stuff that you know happened in the music industry in the last 15 years. It got folded into another major, things got nasty. It didn't look like people were going to buy what I had to sell. It didn't look like psychedelic rock was going to be the next big thing. It's never been the next big thing. It always appeared out of another dimension. It got lucky once in a while and it ran back into our own dimension. That's how I survived for 20 years doing it. I don't count on the big bucks rolling in. Things got screwy and I really love Europe. I love the world. The world knows how to rock. I don't know what America wants anymore. But they definitely don't want rock and roll the way I liked it. Everyone's on their phones and it's pretty evident what's going on. People became their own stars and the live culture took a dive. Unless you're really hot, there's no way for someone like us to tour the States comfortably, meaning on a bus. Playing in front of us people who dug it in most places to make it worth my while, I'd rather go to Europe and live it up. That's what I did. In Europe, there's a huge variety of shows, different kinds of music, and all kinds of cultural appreciation for different kinds of art, whether that is in music and art crossover. Europe for us the past ten to 15 years has been the place to go, and America has been the place to live, but not thumbs up on the art and creativity over here. All the smart people are inside, on the computers and on their phones. They're not representing. Look at the advertising marketing. Look at the movies. Who do they sell that stuff to? They sell it to dumb people. They don't sell that stuff to smart people. That's where the money is. If you're smart and have esoteric traits in the States, it's the best time to be alive for referencing and gathering. To actually perform that stuff and be outside the lines of that, it's the worst time. They don't need you or your band. There's no way I'm going begging door to door. I'm not going, 'Hey, I want to conquer America!' For what — the 30-second attention spans of a bunch of morons? The smart people aren't outside. They're inside. So I decided to give it another shot. It's been ten years. I never planned on going this long. Things started to change. A lot of people started getting bored sitting inside. The novelty of broadband and cellular reception started to wear off a bit. I think people are poking their noses around and are, like, what are they doing outside?"

On the differences between the U.S. audiences versus the world, especially when it comes to technology being involved:

Wyndorf: "It's obvious what goes on, especially in the States… plus you have the whole 20th Century to look up to the person on the screen, on the cover of the magazines and on the radio. The technology back then during that century prohibited anyone from being involved unless they blew somebody or got lucky. Then that technology is there. They ramp it up and it gets better. Now everybody can be their own little person. You have your own magazine, your Facebook page, your social media…you're the guy. You're in. You're the star… kind of. That's good enough for a lot of people. I can see why a lot of focus is dispersed in the States for entertainment and why people don't ride on anything for too long. But somebody like me, who's in a rock band, it's a stage thing when you go to a town and it's in analog. 'Please come and see us!' If there's something else better going on in town, you've got a problem. Now you've got something better going on every single night. There's always something going on. Luckily for us, Europe — it's a big place, which we tour there a lot, and many other parts of the world. They're not behind us in technology but they seem to have chosen live culture and going to a wide variety of shows that being a common practice… it's a hobby. They do it. They want to get out. Going out for them seems to be a big deal. There's not a car culture there. The train stations are really nice. Train stations over here are places you get murdered. That's the way it's been for 30 to 50 years. Before that it was different. All kinds of things that make for the climate of traditional rock and roll is gone in the States. So it has to be either reinvented or re-imagined. In the meantime, I didn't want to be the guinea pig while they set up this brave new world. That's for hardcore bands and metal bands… the stronger guys. They're warhorses."