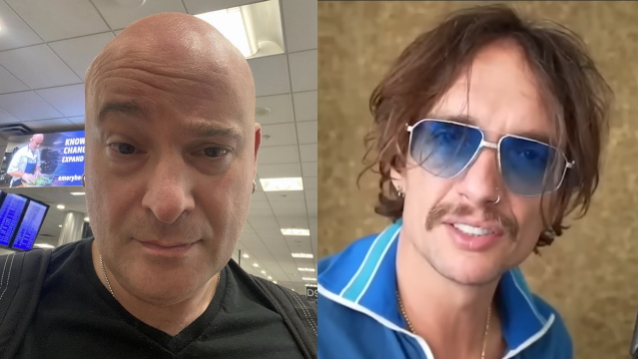 DAVID DRAIMAN And JUSTIN HAWKINS End Their War Of Words, Agree To Meet In Person 'And Laugh About It'

DISTURBED frontman David Draiman and THE DARKNESS singer Justin Hawkins have publicly ended their feud, two decades after THE DARKNESS's disastrous gig as the support act for DISTURBED.

A few days ago, Hawkins took to his YouTube channel to recount the experience of sharing the stage with the Draiman-fronted outfit in London in 2002. He said (as transcribed by BLABBERMOUTH.NET): "THE DARKNESS supported DISTURBED [in 2002] at Brixton Academy. And I really love Brixton Academy; I think it's probably my favorite venue. It was the worst and also one of the best experiences because people were just throwing stuff. But some of the things they were throwing were, like, shoes, bottles and coins and stuff. But the thing about coins is it's money, so in a way that was a good thing, really. It's funny, though, 'cause I was right at the front of the stage. It kind of made me perform more, which made them more angry. And somebody — one of the DISTURBED fans who… I've got a lot of time for DISTURBED as a band; I think they're just brilliant — if you like that sort of thing. But one of their fans threw a piece of chewing gum that presumably had been in their mouth, and it actually landed in my mouth. I was singing [makes choking sound]. It was just a brilliant shot; I had to respect it, really. And then afterwards, David Draiman wasn't very pleased with me. I don't know; I think I may have issued an admonishment to the throng, which didn't go down very well with him. But what are you gonna do? Who gives a fuck? I'm just kidding."

Justin added: "When things like that happen… If a band is supporting my band and then our crowd is not very nice to them, I would always go and apologize. That didn't happen with DISTURBED. I think it actually had the opposite effect and they were angry with us. But… not my problem."

Hawkins's comments came 18 years after Draiman slammed THE DARKNESS as "a joke" and took issue with the British rock band's alleged characterization of DISTURBED as a band that symbolizes "this whole wave of nu-metal that is near its death." Speaking to Metal Edge magazine for its May 2004 issue, Draiman said: "To be perfectly honest with you, I think that THE DARKNESS is a joke, and that's, unfortunately, exactly what the world wants. The world wants rock bands to be idiots. The world wants rock bands to be these bumbling buffoons, these morons who made fun of themselves and their music and their art and don't take themselves seriously in any way. It's all supposed to be a joke. It's all supposed to be a joke. It's unfortunate. I think that there's always a time to be tongue-in-cheek, and there's always time for humor, but there's a time to be serious and a time for emotional content.

"And it's funny, I wouldn't even go ahead and say anything about them per se, unless they had already laid down the gauntlet," David continued. "I heard of late that they have decided to start slinging shit in our direction, that we are an example of one of the bands that they're completely against. That to them, we symbolize this whole wave of nu-metal that is near its death. Are you fucking kidding me? The irony is that they opened up for us in London at Brixton Academy, and here they are talking shit about us. I like [THE DARKNESS's single]. I have nothing against the song. I can't argue that it's a catchy goddamn song, but it's not metal. It's pop-rock. How dare they call themselves metal? That's not metal. It'll never be metal."

Draiman added: "They're a great band. I have nothing against them. But don't claim to be something you're not. Don't claim to be metal. Don't claim that you're authentic and we're not. Fuck you! Who the hell do you think you are? You consider yourselves and you treat yourselves and you conduct yourselves like clowns. And I enjoy laughing, because it's funny and the music is catchy. I even enjoyed them when they opened for us, even though the crowd was booing them to high hell. They were ready to lynch them! We're not looking to pick fights with anybody. We respect everybody. We don't talk shit about anybody."

On Thursday, a short time after BLABBERMOUTH.NET published a report about Justin's latest comments, Draiman took to his Twitter to share the article and he included the following message: "Hey @JustinHawkins of @thedarkness . Sorry you feel that way. There's a lot of things I regret saying in the past and this is one of them. It's been 20 years. I think we're both old enough to have a pint at some point and laugh about it."

A few hours later, Hawkins responded: "This is awesome! I don't drink any more but I'll take a non alcoholic beer. Thanks @davidmdraiman so cool that you reached out :)".

Added Draiman: "We're both survivors of this industry. Im sure we both have stories to tell. Let's figure out when we're both in the same place/same time and make it happen."

Justin previously touched upon THE DARKNESS's experience opening for DISTURBED in a 2011 interview with Music Radar. He said at the time: "We played Brixton Academy with DISTURBED and their fans were a strange bunch. I think half of them despised us and the other half loved it. There was stuff being thrown at us and fights breaking out. We knew it would happen; we were expecting that kind of reaction from the start. But those bottles still hurt."

This is awesome! I don’t drink any more but I’ll take a non alcoholic beer. Thanks @davidmdraiman so cool that you reached out 😊