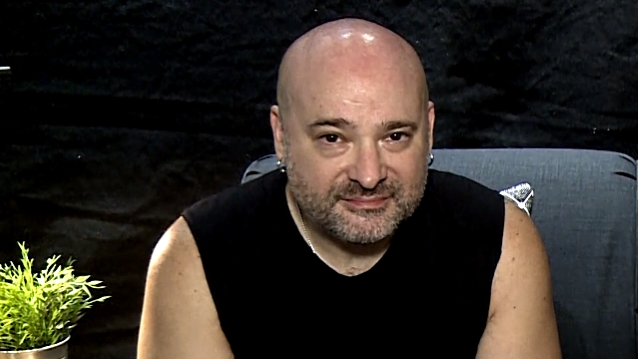 DAVID DRAIMAN On DISTURBED's Maturity: 'We're More At Ease With Wearing Our Heart On Our Sleeve'

Prior to DISTURBED's performance at the recent Sonic Temple Music + Art Festival in Columbus, Ohio, vocalist David Draiman spoke with Lou Brutus of HardDrive Radio. The full conversation can be seen below. A few excerpts follow (as transcribed by BLABBERMOUTH.NET).

On the group's recent European headline tour, their first in nearly a decade:

David: "We for a very, very long time had stuck to the policy of trying to join forces. We went out with AVENGED SEVENFOLD. We did Taste Of Chaos, a package-branded tour that was pretty heavily stacked. There's pros and cons to that when you combine strengths with other bands — that is, you're ensuring, hopefully, a more valuable ticket, something that people people want to spend the money on. What the downside to that is, you never really end up finding what your own true value is. In a post-'Immortalized' environment for us, it was important to see what we were capable of. Much to our personal chagrin of sorts, because we would have rather accommodated as many people as wanted to come see us, but the shows blew out really quickly, much to the delight of promoters and management and everybody else. We would have to played to more people in bigger rooms, and we will next time. The statement has been made. Mission accomplished. It definitely was overwhelming, seeing the passion people had for it and how hungry they were for it. We're flattered and blown away by the response."

On something else he enjoyed about the European tour:

David: "When you're in Europe and you can have some of the most amazing culinary treasures in existence and some of the finest wine... Too many people when they tour, they don't take the time — they don't make the time — to actually enjoy themselves. You're in these meccas... why not dive in a little bit? You have to be able to sample the spices of life every once in a while."

On how the band's upcoming American amphitheater tour will differ from their recent arena tour:

David: "Unfortunately, we can't have that wonderful stage that we brought out with us. That was my favorite part of the whole production — the Starship DISTURBED. It was great. We're still trying to piece together what we can and can't bring as far as our bag of tricks is concerned, but I think that one of the great things about what DISTURBED has evolved into is that we're not dependent on all the toys. The music and the way the show is constructed and the amount that we engage the audience and make them a really bona fide part of the experience makes for a more fulfilling night regardless... I think at the end of the day, even if we can't do everything that we'd like to realistically do, they still get as much of us as they ever will, and we still leave every ounce of our being on that stage. The show will be powerful and it will connect no how many toys we bring along."

On the transition from performing in clubs to playing arenas:

David: "The comparison that I always make, and it may be nerd-like and somewhat crude, but it's like a Jedi — you either have the midichlorian count in you, or you don't. You can try to teach a band or a singer or a front man, from the day they're born until the day they die, the craft of being able to affect people in a certain way, of being able to connect with them on that level, and to be able to have that very, very powerful symbiotic relationship, and it may not translate if they simply don't have the innate, inborn ability. It may sound crass to an extent, but it's just absolute truth, much like you can't teach a guy my size to all of a sudden be an NFL linebacker. It's just not going to happen. There are limitations. If you have it in you and you can develop it — and I've certainly gotten better at it, we've gotten better at it over the course of our career; and it is something that you can grow more powerful in — but if it's just not in you, you can spend all the time in the world. You'll get better to an extent, but never pass the threshold, so to speak."

On how the band's songwriting has changed over the years:

David: "We really don't approach it very differently at all, to be honest. We've just gotten more comfortable with one another. We've gotten more comfortable in our own skin, so to speak. We're more at ease with wearing our heart on our sleeve... I think that the more we work together and the older we get, the less we're worried about specific roles per se, and we're just open to each other's input on everything, whether it's musical or lyrical. The collaborative nature of how we do what we do has intensified. Maybe that's part of what makes for better songwriting — just being a little bit more open to everything."

On enjoying the creative process:

David: "It's absolute magic. You can't ever plan moments like that — they just happen, and they happen when you're very lucky and you're tapped into one another, and they happen when you're lucky enough to find the guys that you were meant to write music with in your life. Danny [Donegan] really is the Joe Perry to my Steven Tyler of sorts — we really just blend beautifully together in terms of how we create. Mikey [Wengren], we call him the backbone of the band for a reason. Sometimes, it takes a hiatus for things of that nature and going away from what you've grown so strong with to realize just how powerful it really is. We have a greater appreciation for our contributions and what they mean to the overall equation than we ever have before."

DISTURBED is touring in support of new album "Evolution", which hit No. 4 on the Billboard 200 chart. They're currently in the midst of an international run, though they did recently come home for show-stealing performances in Columbus (Sonic Temple Art & Music Fest) and Oklahoma (Rocklahoma). Upcoming dates include shows in Russia, Poland, Israel, Prague, Athens and more.