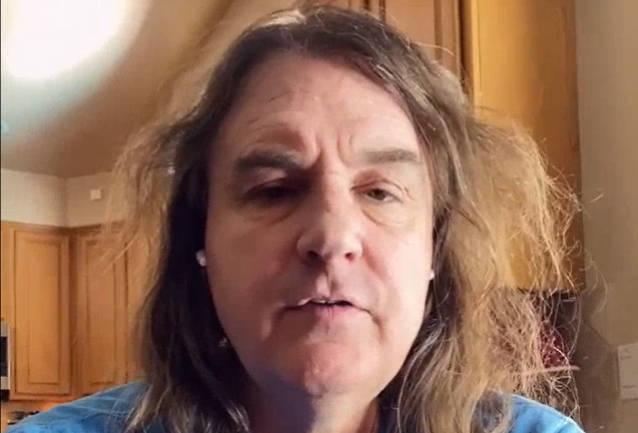 DAVID ELLEFSON: 'It Was Fun To Play' MEGADETH Songs With JEFF YOUNG Again

In a recent Cameo video message requested by a fan, former MEGADETH bassist David Ellefson was asked about the lyrical inspiration for the songs "502" and "Liar" from the band's third album, 1988's "So Far, So Good… So What!" He responded (as transcribed by BLABBERMOUTH.NET): "'502' is the California code for driving under the influence. [Laughs] So listen to it now with that, and it'll all make sense. 'Liar', well… while I helped write some of the music, I did not write the lyric for it, so you'd have to ask the author of the lyrics about that. But it is one of the cool tunes on the record. In fact, it's funny how 'So Far, So Good... So What!' is one of the… it's kind of one of the cool records that was a bit of a… while it had big mainstream success in its day, it's kind of been one of the cult classic records of the catalog. And it was fun to play some stuff with [former MEGADETH guitarist] Jeff Young the other night in Hollywood from it. And [I'll] hopefully do more of that kind of stuff. It's a record I hadn't listened to that much in recent years, and I've kind of gone back into the catalog and revisited a couple of things, like 'Youthanasia' and 'So Far, So Good… So What!', and I really, really like 'em. So, it's kind of fun to just revisit some of your own material over the years. I did a lot of writing on that record as well. It's kind of a special place for me."

As previously reported, Ellefson and Young reunited on stage on May 10 at Ultimate Jam Night, the long-running community-oriented show in residency at the famed Whisky A Go Go in West Hollywood, California, as part of a special tribute to the so-called "Big Four" of 1980s thrash metal — METALLICA, MEGADETH, SLAYER and ANTHRAX. The event marked the first time David and Jeff have played MEGADETH songs together on stage since the U.K.'s Monsters Of Rock festival on August 20, 1988.