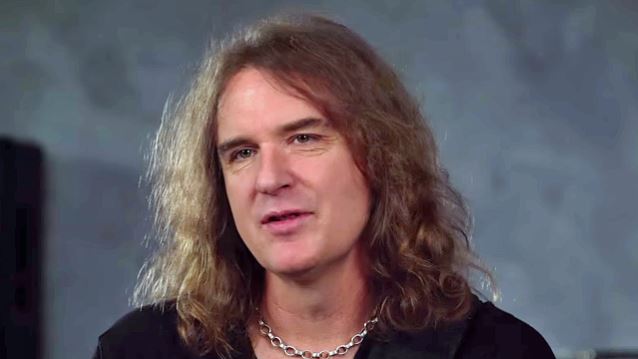 DAVID ELLEFSON: 'MEGADETH Has Been Reborn'

David Ellefson spoke to Greensboro.com about the attempted reunion of MEGADETH's classic "Rust In Peace" lineup prior to he making of the band's latest album, "Dystopia". Ellefson and MEGADETH leader Dave Mustaine tried to re-team with drummer Nick Menza and guitarist Marty Friedman for a new album and tour, but instead ended up recording the LP with MEGADETH's latest additions, Brazilian guitarist Kiko Loureiro, best known for his work with ANGRA, and LAMB OF GOD drummer Chris Adler.

"There was always this calling from our fans to revisit the 'Rust In Peace' lineup, which we had all moved on from, including those former members," Ellefson said. "So, we all had a meeting. Had a discussion. We even did a little bit of playing together. And we realized that it would be better to remain friends and leave that legacy sit as the heroic memory that it is in the minds of so many of our fans. It was clear — the past is the past. We're going to let that truly rest in peace, if you will. No pun intended."

He added: "What's really cool about 'Dystopia' is that fans used to always clamor for things of the past. Those days seem to be over. I think we finally transitioned past that. MEGADETH has been reborn."

Ellefson also praised Adler, who came into MEGADETH as a lifelong fan.

"He got to have his fan boy moment, saying, 'Man, I listened to the ['So Far, So Good ... So What!') cassette so much, I wore it out!'" Ellefson said. "And I think a lot of fans are thinking Chris might come in and bring his LAMB OF GOD sensibilities into MEGADETH ... and that's not easy, because artists always bring with them their own signature sound. And I think what you hear on 'Dystopia' is you hear Chris Adler being a phenomenal MEGADETH drummer."

Mustaine had previously said that the planned reunion of the "Rust In Peace" lineup failed to materialize for a number of reasons, including a difference in vision for the group's new music. He said: "Marty had sent some e-mails saying, 'Oh, man, you know, the fans have this self-inflated importance of 'Rust In Peace' beyond what it really is. And I was, like, 'Huh?' So I didn't know if that was a backhand to the face of the fans or not, but he had basically said that if we were gonna do anything, it had to be better than 'Rust In Peace'. And he sent me over some links to some songs that he thought should be the direction that we were going in, and one of it was this J-Pop band with some Japanese girl singing, and I was, like, 'Uh-uh. This ain't gonna work.' More power to [Marty for being into that stuff]. Do what you want, Marty. He's a great guitar player. But I'm not gonna sing like a Japanese girl."

Menza claimed in a 2015 interview that "Rust In Peace" lineup reunion fell apart because Mustaine "didn't wanna show me any love at all."

The drummer said that he was approached by Mustaine and Ellefson to replace Shawn Drover at the end of 2014, and that he had started working out new tracks with the band. But the plan collapsed after he was offered a contract he described as "very unfair."

Speaking to Canadian journalist Mitch Lafon, Nick said: "I tried to make it happen by all my means and efforts, I tried to make it go down, but they just didn't wanna show me any love at all, is really what it boils down. You know, I don't need to do this. I wanted to."

He went on to say: "We should have done an album this time. I was ready. I was out there recording with Dave, new songs, and we played a bunch of old songs for a weekend in San Diego, and then no agreement was put on the table for me — nothing in writing. I'm, like, 'Dude, I'm not coming back until you give me a contract and some kind of agreement here.' And they wouldn't produce that. So… If you don't wanna split the profits with me on the tour, forget it. I've got other stuff I can do that's more exciting to me."