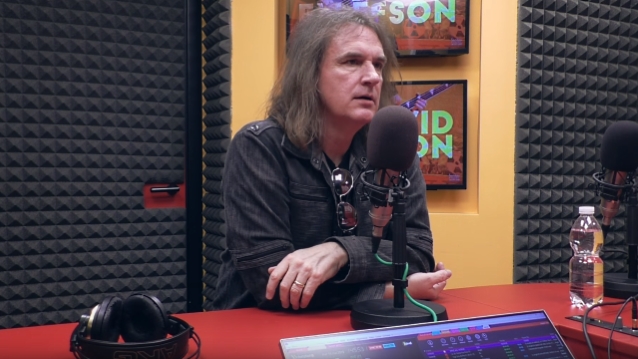 DAVID ELLEFSON On MEGADETH's Next Record: 'Trust Me, It's Not Gonna Be A Lightweight Album'

David Ellefson says that MEGADETH's 35th-anniversary celebration in 2018, which saw the band putting out special releases, exclusive merch items and creating one-of-a-kind events and opportunities for fans worldwide, has influenced the musical direction of the group's next studio album.

"I think one of the things that the 35-year campaign has done is it's gotten all of us, and, of course, me and Dave [Mustaine, MEGADETH guitarist/vocalist] being there at the beginning, and then certainly Dirk [Verbeuren, drums] and Kiko [Loureiro, guitar] having a different reference to MEGADETH…" the bassist told Italy's Linea Rock during a recent interview (see video below). "Kiko, he reminds us that he saw us play in 1991 at Rock In Rio, and that was his first real introduction to MEGADETH, and that was 'Rust In Peace' — it's album [number] four; that was quite a ways into our career at that point. Dirk being even younger, but being a drummer, being a student of the MEGADETH catalog, he goes back and really references a lot of the early Gar Samuelson from 'Killing Is My Business' and 'Peace Sells', and he really kind of gets inside the mindset of a player like Gar. So it's nice that we have bandmembers that, while not the original guys, they really bring kind of a point of reference to me and Dave of the things that were exciting to the fans at the time when they discovered MEGADETH.

"And so, as we move forward now, Dirk and Kiko can play anything — I mean, they're just incredible musicians — so to have Dirk go back into the earliest MEGADETH, yet here he is an inventor, basically, of the grindcore drumming, to marry those two worlds together is exciting," Ellefson conntinued. "And same for Kiko. Kiko is the guy who, he says, he goes, 'Some of these Marty Friedman solos are very, very difficult to replicate,' because of Marty's style. He talks about Chris Poland. He says, 'Man, it's like playing the Jan Hammer' — who was the keyboard player with Jeff Beck and, of course, wrote the 'Miami Vice' soundtrack, but he was a keyboard player who almost played like a guitar, because he would bend notes. So Kiko, again, being a schooled musician, a jazz musician as well, can go back and really get inside of the nuances of the past MEGADETH, yet he's also a super-contemporary, international musician. So it's really kind of a nice thing that we have where the influences and the references that we can bring into this next MEGADETH record…."

Ellefson went on to say that he agrees with Mustaine's recent comment that MEGADETH's follow-up to 2016's "Dystopia" will be a "very heavy" album. "It's definitely heavy; the stuff we're working on is heavy," he said. "And fans always wanna hear: 'Oh, it's heavy, its' heavy, it's heavy.' Trust me, it's not gonna be a lightweight album, so Dave's right about that. At the same time, adding to what Dave said, there's, again, the first record we're gonna really hear of the four of us having been on tour and working together as a band now going into the studio versus putting a band together without having any road experience. So I think there's a lot of really cool experiences that the four of us draw on to bring together for this new album now."

MEGADETH's next LP will be the first to feature Verbeuren, who joined the band nearly three years ago.

"Dystopia" was MEGADETH's first album with Loureiro, who was previously best known for his work with the Brazilian metal band ANGRA.

MEGADETH will support OZZY OSBOURNE on the next North American leg of the BLACK SABBATH singer's "No More Tours 2" in May, June and July.