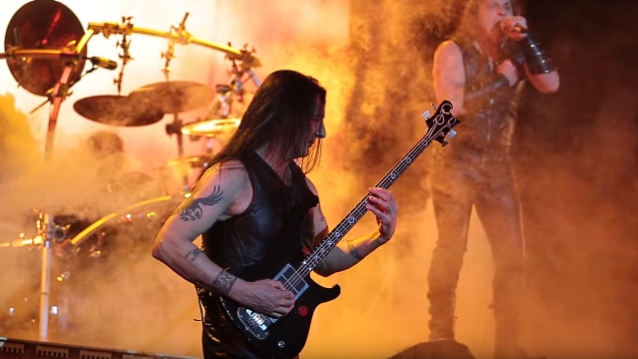 On July 1, 1983, MANOWAR released its second album, "Into Glory Ride", an imperious statement of metallic intent and one of the most brutal, raw and punishing records ever released. From the opening assault of "Warlord" and the monumental "Gates Of Valhalla" to the devastating drama and doom-laden fury of "Hatred", and culminating in the morbid grandeur of "Revelation (Death's Angel)" and the life-affirming splendor of the closing epic "March For Revenge"… all instantly recognizable as the works of four true metal maniacs.

Forced into a somewhat rushed and compromised production — which did not prevent "Into Glory Ride" from winning a prime place in metal history — "Hail To England" followed a little over six months later. Another record packed with tracks that would soon become fan favorites; from "Bridge Of Death" or the jaw-shattering "Kill With Power" to the stirring melodies of "Hail To England" itself, and others alike.

Now these two immortal landmarks have been revived and revitalized for a completely new and improved experience.

Remixed in MANOWAR's very own Valhalla Studios by longtime collaborator Ronald Prent utilizing the mind-boggling 27,000-watt PMC monitors and remastered by four-time Grammy Award winner Darcy Proper, these Imperial Editions are a statement of what MANOWAR are committed to deliver for their loyal followers: the royal standard of sonic bliss.

Fans will first be able to secure their "Into Glory Ride Imperial Edition MMXIX" and "Hail To England Imperial Edition MMXIX" at the merch booth during MANOWAR's "The Final Battle World Tour", starting in Frankfurt, Germany on March 29 and on all further dates on this tour leg. The albums will also be available digitally on iTunes worldwide at the same date. The rollout will then continue into retail and online stores starting May 30 and digitally on Amazon and Google Play.