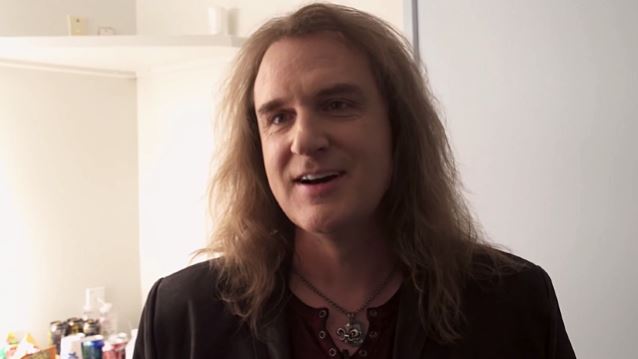 DAVID ELLEFSON On New MEGADETH Album: 'I'd Like To Think It's Not Gonna Be A Stinker'

In the second part of a recent interview with the "White Line Fever" podcast (hear audio below),MEGADETH bassist David Ellefson spoke about the musical direction of the band's forthcoming studio album, which is tentatively due in late 2015 or early 2016.

In a recent interview with RollingStone.com, MEGADETH mainman Dave Mustaine stated about the progress of the recording sessions for the band's next CD: "We have 15 tracks — 13 originals and two cover songs. We did 'Melt The Ice Away' by BUDGIE and 'Foreign Policy' by FEAR… There's a song called 'The Emperor Has No Clothes', and another called 'Tyranocide'. Several have working titles but I don't want to say what they are. After we write the lyrics, they'll come."

Regarding the sound of the new MEGADETH material, Mustaine said: "Over the years we've always said, 'We're going back to our roots.' But the naysayers, they just want 'Rust In Peace' 20 times, which is never gonna happen. Because I've never written the same song twice. Unlike a lot of other rock and metal bands that, you know, they rely on a set formula, I try and make the songs all different. The funny thing, though, was that when Ellefson was doing the bass tracks, I was telling him, 'This is the 'Tornado' ['Tornado Of Souls'] part,' 'This is the 'Bad Omen' part,' 'This is the 'Black Friday' part,' 'This is the 'Holy Wars' part.' Because a lot of the things were in that kind of vein. Now, is it going back in time? Hell, I don't know. But I like what I'm hearing."

MEGADETH's next album will be the band's first to feature LAMB OF GOD drummer Chris Adler and Brazilian guitarist Kiko Loureiro, best known for his work with ANGRA.