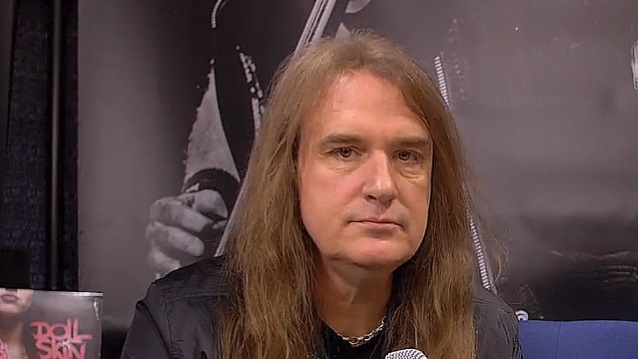 "The Rockside Chronicles with Shawn Sixx" conducted an interview with MEGADETH bassist David Ellefson during January's NAMM convention in Anaheim, California. You can listen to the entire chat via the SoundCloud widget below. A few excerpts follow (transcribed by BLABBERMOUTH.NET).

On whether caffeine is the new "drug of choice" for veteran rockers:

David: "It's been my drug of choice for years, even when I was doing other drugs of choice. Coffee has always been in the mix. [Laughs] Look, we all grow up. The truth of it is, I have been drinking coffee, really, since I was 18 years old, when I moved here to L.A. We started MEGADETH, our first drummer, Dijon Carruthers, he and I were like little coffee snobs on our very limited budget that we could be snobby about coffee and that's just kind of stayed the course with me throughout my career."

On how aggressive the coffee business has become since he started Ellefson Coffee Co.:

David: "What's interesting is that it isn't just coffee. Coffee just isn't just for breakfast anymore. We partnered with Hydra Beer [Company], which is in Sioux Falls, South Dakota, for a new coffee stout we're rolling out. Actually, with Desert Rock Winery, we're rolling out 'Combat Wine' and they also have a 'Combat Hard Cider' that they're incorporating Ellefson Coffee into that as well. And I'm told, because I don't drink that beverage, but I'm told it has this Häagen-Dazs, creamy sort of flavor to it."

On whether he foresees his coffee company becoming the focal point of his career once he transitions away from music:

David: "You know, I'll always play music, but I'll be honest with you: There's days when I don't always play music, but I drink coffee every day. I think it is [the next natural step]. We're lucky that in this day and age, I think it all started with the 'Cheeseburger In Paradise' guy [Jimmy Buffett] where the lifestyle comes into your music and your fans embrace the lifestyle and I think this is just how it's done. I'm lucky enough, we just announced the 35th anniversary of MEGADETH this week, so obviously, we've been in the game for a little while and I think our fans like it. They like to have that personal connection with us, especially in metal and especially in MEGADETH. That's something we've always been very open about."

On whether MEGADETH, his coffee business and EMP Label Group jell together:

David: "It's seamless. When I came back to MEGADETH in 2010, I pulled out my little flip camera and I was so thankful that we were able to mend fences, that we were able to come back together. We were celebrating the 20th anniversary of 'Rust In Peace', and my thought was: 'You know what? We get to live a charmed, dream life because of our fans. Let's bring the fans on tour with us by way of video.' A lot of them were stopping into coffee shops and sort of posting that kind of thing."

On whether he struggles to adapt with the demands of social media and the modern elements of fan interaction:

David: "It's totally natural. In fact, it's funny, Monday night or Monday morning, actually, I'm over in Las Vegas at a trade show called NamesCon and it's about domain names. It came about because of a conversation which led to a podcast and it was largely about MEGADETH was the very first band to have an Internet site called Megadeth Arizona that Capitol Records built for us, so we've always been on the front edge of technology in making our records, social media, the Internet and so to me, all this social media and pushing this stuff out…the first thing you do when you show up is 'Hey, let's get a photo.' Bang, you pop it on Instagram and throw it across your social [media platforms]. It's just part of how we communicate to our fans. Music is one way, social media is another, obviously, face to face like this is the other."

Tentatively due in 2019, MEGADETH's follow-up to 2016's "Dystopia" will mark the group's first release to feature drummer Dirk Verbeuren, who officially joined the band just under two years ago.

In 2018, MEGADETH will celebrate its 35th anniversary all year long, with special releases, exclusive merchandise items, and one-of-a-kind events and opportunities for fans worldwide.