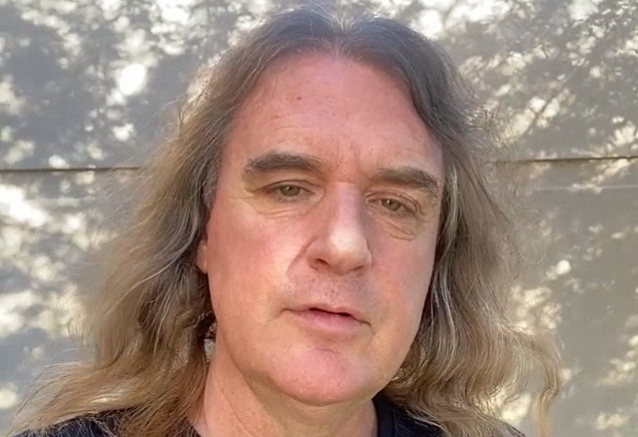 DAVID ELLEFSON: 'The Only Thing Harder Than Getting To The Top Is Staying At The Top'

In a new interview with "On The Road To Rock", former MEGADETH bassist David Ellefson spoke about the importance of musicians branching out and playing other styles of music, especially in the later years of their careers. He said (as transcribed by BLABBERMOUTH.NET): "I've done the grind. I've done the whole 'build the house, keep the house going' in rock and roll, and I've done all that successfully, fortunately. And the only thing harder than getting to the top is staying at the top. And no one stays at the top forever, 'cause there's someone else coming up behind you.

"New genres [are] always driven by younger artists coming up," he explained. "Those of us that have been fortunate enough to create a genre ourselves and carve our place in it, it's cool that we can just kind of stay in that lane and do that. But at the same time, once that lane has been created, which it has for me in thrash and speed metal and that kind of stuff, it is cool to be able to go do some other things, 'cause every day you wake up, that isn't always exactly what you wanna do; there are other things. And I think I've proven now with a lot of these records that I've put out over the years I'm a pretty wide, versatile musician. I'm not just a 'metal dude,' even though every poster on your wall is stuff I listen to and go see. So, my heart is… Look, W.A.S.P. came to town the other night. I went down to go see Blackie [Lawless] and ARMORED SAINT. When KISS comes through, 'Let's go see KISS tonight.' Same with [IRON] MAIDEN, Alice [Cooper], et cetera. So I'm there a hundred percent as a loyalist and a fan myself. But when I create things, it's fun to do it with musicians who… We've grown up together, so we're well known. My rolodex is full of those musicians, because we all grew up together. We weren't famous at one point, and now we all are. So those are the guys I reach to. If I need a drummer, if I wanna partner with, in [the] case [of my recently released album] Jeff Scott Soto, call Jeff. He's that guy. You can count on him; you can rely on him. And sometimes my friends are looking to do other things too. They've made their mark for doing what they do, and it's fun to go try some new things and kind of reinvent our own wheel as we're doing it."