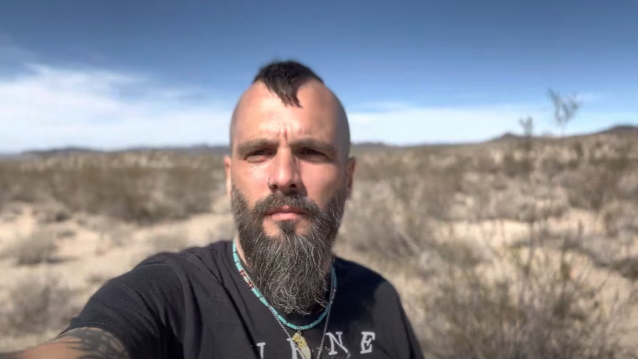 KILLSWITCH ENGAGE frontman Jesse Leach has gone public with his engagement to his longtime girlfriend Corinne Paris (a.k.a. Philia Porphyra).

Earlier today, the 44-year-old musician and his 32-year-old bride-to-be shared a number of engagement photos on Instagram, with the singer writing: "Almost a year ago I made a vow to a woman I love. I had a custom made ring to suit her particular style and did my best to recreate a moment in our relationship that was a crucial turning point for us both. I then asked her to be my wife.

"We didn't do any photos or make a huge deal out of it but it felt right to commemorate this moment even if it was a year later. So we called on the very talented @noel_mcgrath to do a couple of shoots.

"This one was just as the sun slipped away under the moon light!

"The photos from our daytime shoot near our home are next level good, I’ll post a few in the near future.

"Although the wedding is a long way off (as we are doing it in a unique and beautiful location that requires planning and giving loved ones a big heads up) this was a cool way to capture these days for the memories. One day when we look back we can remember 'back when we were younger' or whatever we humans do when we get old and nostalgic.

"Side note when you are planning a wedding or doing anything that involves you and other people, remember none of it has to make sense to anyone but the two of you. If people have issues or opinions about how, where or what let them have their issues. Try not to stress it, it should be fun and personal to what you want, period.

"I love you @porphyraphilia it's been a crazy ride so far I look forward to many more adventures, laughs and memories ahead!

"Celebrate love Lord knows the world needs a hell of a lot more of it!"

In her Instagram post, Corinne wrote simply: "Whatever our souls are made of, his and mine are the same.

"It's almost been one year of engagement to the one my soul loves."

Leach and Paris share a home in Woodstock, New York.

Nearly four years ago, Leach revealed on social media that he would take time "to get help" after informing fans that he and his wife of over 16 years, Melissa, had decided to go separate ways.

Leach, who has been open about his battles with anxiety and depression, took to Instagram to let his followers know that he would be seeking treatment so that he can avoid becoming "another statistic of suicide."

2018 was a tough year for Leach, who underwent surgery on his vocal cords to remove nodules in April 2018, and dealt with depression, anxiety, and "full-on mental breakdowns" throughout the rest of the year. Although these setbacks had an impact on the recording schedule for the latest KILLSWITCH ENGAGE album, 2019's "Atonement", Jesse eventually finished laying down his tracks for the effort with the help of guitarist and producer Adam Dutkiewicz, whom he has described as his "musical soulmate."

In May 2018, Leach gave a shout-out to his "badass" then-wife for supporting him through his vocal surgery and for being his "biggest fan, biggest critic, best friend, partner in crime and the love of my damn life."

Jesse previously revealed that the reason he originally left KILLSWITCH ENGAGE in 2002, after recording two albums, was because "there was definitely something wrong with my head. I was dealing with a depression," he said. "At that time, it was a pretty lowdown feeling of being alienated, just sort of not being prepared mentally for a life on the road."

In August 2018, Leach wrote lengthy social media post in which he once again admitted that he had "a mental illness," adding: " I too have anxiety, suicidal thoughts, depression and addictions. I do and say things 'out of character' when I am mentally 'high or low' — it's just part of the distinction of the illness."