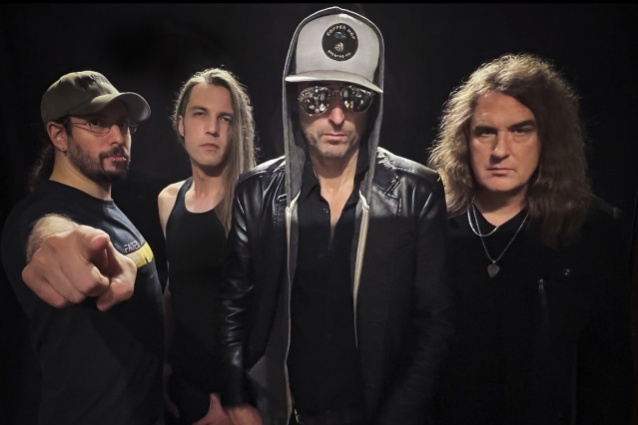 THE LUCID guitarist Drew Fortier has been diagnosed with testicular cancer and is currently recovering from surgery.

On Wednesday (May 25), Fortier took to his Facebook page to share a couple of post-surgery photos, and he included the following message: "I'm alive! The facts: I had cancer in my right testicle and had said testicle removed today. Waiting to hear back from pathology on if it spread but so far so good! The tumor got the size of a tennis ball. It was crazy. Funnily, I woke up from the anesthesia talking about BANG TANGO. Also we have a new E.P. from THE LUCID coming out very very soon called 'Saddle Up And Ride'. Also moral of the story: check your balls fellas!! Also thank you to everyone who reached out and sent me well wishes!! All of you are incredibly wonderful!!!"

THE LUCID's self-titled debut album, was released in October via SpoilerHead Records. The LP was produced by Heller and mixed/mastered by Lasse Lammert.

Ellefson previously stated about the LP: "It's been a real blast making a record with these guys and I must say that it's refreshing to explore some new musical avenues… to step out a bit from what each of us have done stylistically in our own careers. There was an effortless synergy that came with creating these songs together which is always amazing when working with new people. I'm looking forward to everyone checking it out!"

THE LUCID's previously announced U.S. tour, which was supposed to take place in May, has been postponed in the wake of Fortier's diagnosis.

Our guitarist Drew Fortier had been diagnosed with testicular cancer and is currently recovering from surgery. Read more below.