The final six shows of VAN HALEN vocalist David Lee Roth's Las Vegas residency have been postponed due to the coronavirus pandemic that is spreading across the globe.

All six concerts that were scheduled to take place this month — March 18, 20-21, 25, 27-28 — at the House Of Blues were called off on Sunday (March 15),three days after the Nevada governor issued a declaration of emergency due to the coronavirus pandemic.

Roth tweeted out the news of the postponement, writing: "@HOBLasVegas postponed. And now a word from Dave 'Somebody get me a Doctor, just kidding.. Take your Whiskey home, not kidding..' Love Dave #DavidLeeRoth #DiamondDave #DLR"

Roth has just finished performing as the opening act for the February/March North American leg of KISS's "End Of The Road" farewell tour.

Roth's Vegas residency isn't be the first time he has set up shop in Sin City. Back in 1995, Roth completed a Las Vegas engagement at Bally's Hotel and Casino and another short run at MGM Grand.

VAN HALEN has been inactive since it finished its U.S. tour in October 2015 at the Hollywood Bowl in Los Angeles, California.

Back in September, Roth said that there were no plans for VAN HALEN to do anything for the foreseeable future. "I think VAN HALEN's finished and this is the next phase," he said, referring to his solo project.

And now a word from Dave

“Somebody get me a Doctor, just kidding..

Take your Whiskey home, not kidding..” 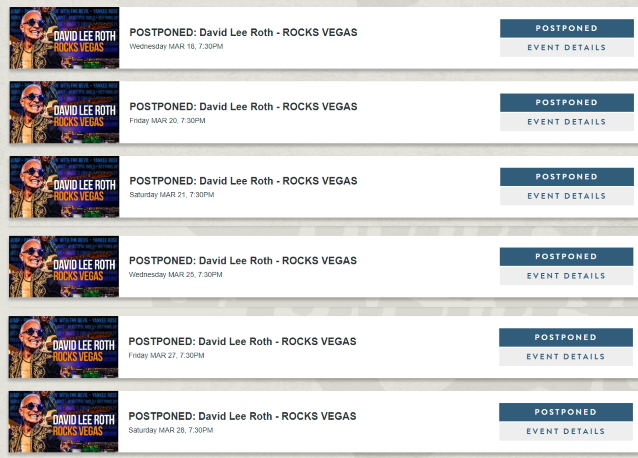