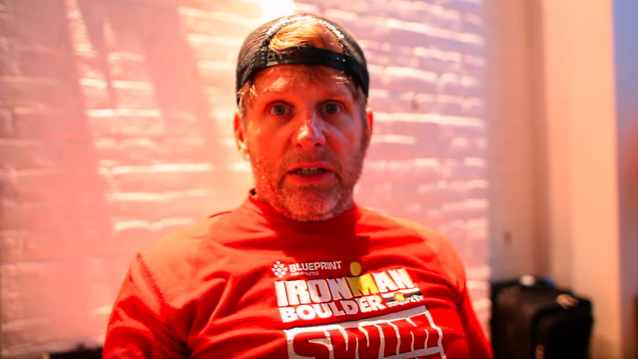 Former CRO-MAGS frontman John Joseph says that "no one is addressing the real issue" with the burgeoning coronavirus pandemic around the world — that eating animals is bad for human health.

Joseph, who is also an author, Ironman triathlete and proponent of a vegan, clean-living lifestyle, made his comment in response to reports that the virus may have initially spread from a wholesale market in Wuhan, China, where vendors legally sold live animals from stalls in close quarters with hundreds of others.

Earlier today, John took to his Twitter to share a Wired.com article headlined "Modernizing Meat Production Will Help Us Avoid Pandemics" and he included the following message: "100% - and while everybody’s quarantined and they develop a vaccine no one is addressing the real issue - if we keep eating animals it's only gonna get worse" He added: "And someone called the carnivore doctor is telling people to improve their immune systems during this by eating more meat can you fucking believe that one - these fucking Jabronies never give up and caused this shit"

Last year, Joseph, who is the author of the book "Meat Is For Pussies", which attacks the myth that men need meat to be fit and strong, told GQ.com that his plant-based diet is "second nature at this point." He explained: "You know, we look at everything that we put into our cars, we're obsessed with the fine details of all those sorts of things. But when it comes to what we put in our bodies, man, if you read the label and you can't pronounce this shit, you shouldn't be eating it. Our body is our only vehicle to get through life."

The new coronavirus originated from one of Wuhan's many "wet markets" — so called because animals are often slaughtered directly in front of customers. These markets put people and live and dead animals — dogs, chickens, pigs, snakes, civets, and more — in constant close contact.

Last month, animal rights organization PETA was criticized by some social media users for implying that eating meat may cause coronavirus.

The controversial tweet from PETA consisted of the message: "Carnivorous is an anagram of coronavirus. Coincidence? We think NOT!

"Scientists have a hunch that contact with live animals or their dead flesh may be the source of the deadly virus," PETA wrote.

The European Food Safety Association has released an article that says there is no scientific proof so far that coronavirus can spread through food. In addition, the World Health Organization (WHO) has suggested that it is always best to thoroughly cook meats and eggs before consuming them.

Joseph and drummer Mackie Jayson recently reached a settlement with Harley Flanagan regarding ownership of the CRO-MAGS name. Flanagan is now performing under the name CRO-MAGS while Joseph and Jayson are performing as CRO-MAGS "JM".