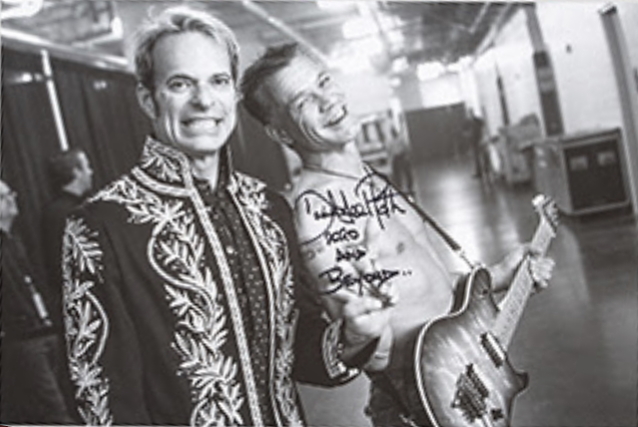 Julien's Auctions announced today the marquee lineup of items to be sold at MusiCares Charity Relief Auction taking place live in Beverly Hills and online at juliensauctions.com on Sunday, January 31, 2021.

An exciting highlight added to the auction will be a black jacket embroidered with rhinestones worn by music icon and original VAN HALEN singer David Lee Roth, on stage performing with VAN HALEN during their landmark 2007-2008 tour when he reunited with the band for the first time since 1984. The jacket was also featured in a photograph accompanying a lot signed by Roth with Eddie Van Halen taken backstage by photographer Robert Yager. The jacket was seen in Roth's recent tweet with the photo in tribute to the late guitar legend on October 6, 2020, the day of Van Halen's passing with the words, "What a Long Great Trip It's Been.." (estimate: $2,000 - $4,000).

Registration is required to bid in this online auction and can be done in person at the exhibition, or online before the sale at the JuliensAuctions.com registration page to bid by phone, proxy or in person, or online at JuliensLive.com to bid live online, or by calling (310) 836-1818.

There are four ways to bid in this sale:

* Bid through Julien's Auctions online live in real time at JuliensLive.com.
* Bid over the telephone through an auction house representative.
* Submit a bid in person
*Enter absentee bids. Absentee bid forms are included in the back of each catalogue, and are also available by calling Julien's Auctions or online at JuliensAuctions.com.

After Eddie's death was announced, Roth tweeted out the above-mentioned photo of him and Eddie in what appeared to be a backstage area at an undisclosed venue.

This past July, Roth said that he didn't know if Van Halen would ever tour again. He told The New York Times: "I don't even want to say I've waited — I've supported for five years. Because what I do is physical as well as musical and spiritual — you can't take five years off from the ring. But I did. And I do not regret a second of it. He's a bandmate. We had a colleague down. And he's down now for enough time that I don't know that he's going to be coming back out on the road. You want to hear the classics? You're talking to him."

Eddie passed away at the age of 65. He had been battling throat cancer and died surrounded by friends and family at a Santa Monica, California hospital, according to TMZ. He is survived by his second wife Janie, brother Alex and son Wolfgang.

VAN HALEN had been inactive since it completed its U.S. tour in October 2015 in Los Angeles, California.

In early 2019, rumors were rampant that the classic-era lineup of VAN HALEN would reunite for the first time since 1984. It was later revealed that the tour never materialized due to a health setback involving Eddie.

Back in September 2019, Roth said that there were no plans for VAN HALEN to do anything for the foreseeable future. "I think VAN HALEN's finished and this is the next phase," he said, referring to his solo project.