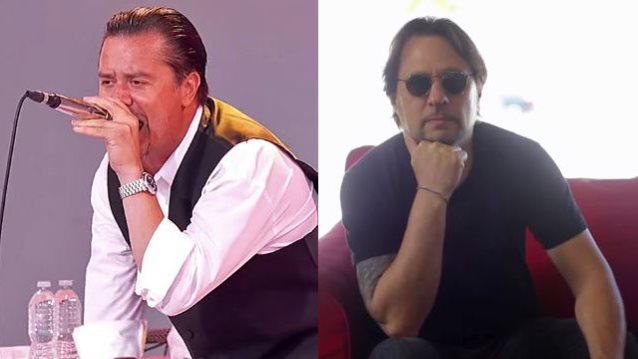 DEAD CROSS, the Southern California outfit featuring drummer Dave Lombardo (ex-SLAYER, SUICIDAL TENDENCIES, MISFITS),and singer Mike Patton (FAITH NO MORE),has finished mastering its debut album at Golden Mastering in Ventura, California, to be released later in the year via via Ipecac Recordings. The effort was helmed by producer Ross Robinson, who has previously worked with KORN, DEFTONES, SEPULTURA and LIMP BIZKIT, among others.

Lombardo recently told Madcap Music Review about the source of the searing anger and rage that is fueling the aggression of his new band. He said: "Ever since the tragedy in Paris [that took place in November 2015]; that's why I'm fucking pissed. Because everything hit really close to home. I could have been on that stage [at the Bataclan venue in Paris where EAGLES OF DEATH METAL performed]. I could have been at a festival and some fucking son of a bitch comes in with a shotgun or whatever and starts [blowing] people's heads off. So I'm just… I'm angry. I'm over it, but, you know, with the new releasing some aggressive music, [we're able to] get all the feelings out, get all the shit that we wanna say out in this music. It's not gonna come out playing alternative music, it's not gonna come out playing soft. And my name and my drumming is synonymous with thrash and hardcore music, so I'm really excited about this."