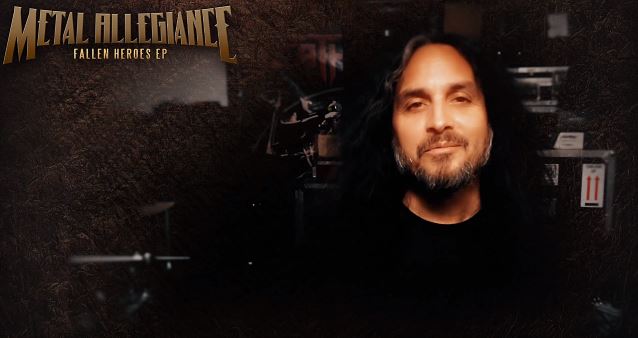 A four-minute video clip in which DEATH ANGEL's Mark Osegueda talks about his cover of "Suffragette City" by David Bowie, which appears on "Fallen Heroes", can be seen below.

Osegueda states about Bowie: "He transcended so many more things then just the word musician. He was a true original and made people feel as if they were apart of something. He made you feel comfortable within your own skin about being different and apart from the masses."

"The end of 2015 and most of 2016 has been a brutal year with many of our heroes passing," says Menghi. "When [METAL ALLEGIANCE drummer Mike] Portnoy called me in January to alert me that Glenn Frey had passed, I literally broke down. That night after having a few Tequila Sunrises in Glenn's honor, a lightbulb went off… We're going to record a few tunes to honor our fallen heroes. I called back Mike that evening and asked him what he thought and the next day we were in the studio recording. By week's end, all guitars, drums and bass were complete.

Pre-order your copy of "Fallen Heroes" via iTunes and receive "Iron Fist" as an instant grat now.