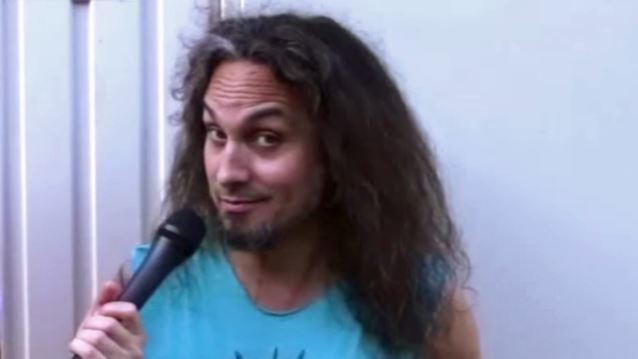 Conny Schiffbauer of Rock Hard magazine conducted an interview with vocalist Mark Osegueda of San Francisco Bay Area metallers DEATH ANGEL at this year's edition of the Bang Your Head!!! festival, which took place last month in Balingen, Germany. You can now watch the chat below.

Speaking about the musical direction of DEATH ANGEL's forthcoming follow-up to 2013's "The Dream Calls For Blood" album, Mark said: "We actually had a plan, to a certain degree. When we started working with [producer] Jason Suecof for the last two records, [2010's] 'Relentless Retribution' and 'The Dream Calls For Blood', we thought we were gonna do two records intense like that and kind of go back [to the more] melodic [direction of 1990's] 'Act III', but the last two records, we've been loving so much writing that style, and the crowds have been enjoying them so much. And I think we're gonna kind of stick with the same brutality and technicality and, yeah, kind of keep writing this route. 'Cause one thing… In our minds, even if we think we're being more brutal than we've ever been, it's inevitable that we are obsessed with melody, so there's always gonna be melody that separates us from, say, different thrash bands or extreme bands, because we always veer to a melody and catchy hooks. No matter how brutal we think we're being, we like to throw in hooks, so we're just gonna carry on how we're doing now and try to pick as many of the young punters there and keep our stronghold on the old punters."