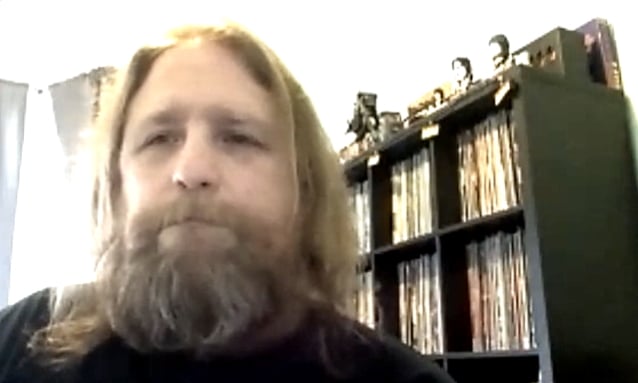 DEATH ANGEL drummer Will Carroll has once again spoken out about his battle with COVID-19, the disease caused by the new coronavirus. The musician, who spent almost two weeks on a ventilator in an intensive care unit at a Northern California hospital, first got sick when he and the rest of DEATH ANGEL spent more than a month on the road in Europe with TESTAMENT and EXODUS as part of "The Bay Strikes Back 2020" tour.

Carroll discussed his experience of testing positive for the life-threatening illness during an interview with Pierre Gutiérrez of Rock Talks. Asked if there was any lung damage as a result of COVID-19, Carroll said (see video below): "No. I recovered… I had heart failure, too, during the coma, so that was the big issue — my heart took some damage. But after a couple of months of just laying low and taking it easy and trying to live a healthier lifestyle, my heart recovered completely. My last checkup with my doctor, they said my heart was fine. My lungs didn't take that much damage, surprisingly — it was my heart that took the brunt of the attack. But everything is recovered, and I don't have any lingering effects, surprisingly. I'm very lucky. I've been playing drums, and I'm not getting winded [and] I don't feel any weird sensation. So I'm doing okay."

Regarding how his drumming ability has been affected by his COVID-19 battle, Carroll said: "Oddly enough, I'm playing drums better than I ever have in my life right now. It's really strange. Maybe because I'm not drinking as much as I used to — I'm just not partying. I'm taking care of myself a lot more nowadays, so that probably plays a big part in it. And I'm taking drumming a lot more seriously. Because after I got out of the hospital, I couldn't walk — I had to learn how to walk again. The was the most scariest [sic] aspect of this whole thing — was not being able to walk. And I was just really concerned that I wouldn't be able to drum — especially do double bass; that I wouldn't be able to do double bass again. So I had a therapist come over for a few weeks, and I just did my exercises and stair stepping and stuff like that, and I was able to walk within, like, a week afer being in the hospital. They thought it was gonna take maybe a month, but I was able to walk — a week, a week and a half maybe, I was on my feet and walking without any assistance. So I was pretty determined, and I worked hard at it — I didn't waste any time in that aspect.

"I don't take my health for granted," he continued. "I don't take my drumming for granted either now. So I'm practicing more and I just have more speed and I'm just playing with more determination and more focus. And the guys in DEATH ANGEL have totally noticed that. We did a live stream for Christmas, like, a month ago — we did two shows for our annual Christmas shows. And they noticed that I was just playing with a new sense of urgency and just more power and more consistent. So that's definitely the silver lining in all of this. I'm taking the good out of this. Just being healthier and playing drums more efficiently is what I'm all about right now."

Carroll woke up from a medically induced coma on March 30, 2020 after spending nearly two weeks on a ventilator. His doctors at the California Pacific Medical Center told the San Francisco Chronicle he was in critical condition and came close to dying. They said that the hospital "tried every treatment they had heard about, from hydroxychloroquine and azithromycin to the experimental drug remdesivir."

On March 22, 2020, TESTAMENT singer Chuck Billy revealed that he had tested positive for COVID-19. Several days later, EXODUS guitarist Gary Holt also said that he was infected with the new coronavirus. Both had spent more than a month on the road with DEATH ANGEL as part of "The Bay Strikes Back 2020" European tour in February and March of last year.