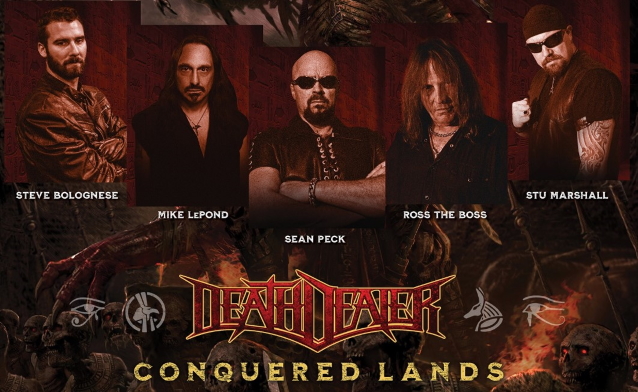 "Conquered Lands" was mixed by Marshall, and guitars, drums, and bass were treated at Monolith Studios in Melbourne, Australia by Chris Themelco. The album was mastered by Maor Appelbaum in Los Angeles, California.

The DEATH DEALER sound mixes classic heavy metal with elements of thrash, power, and epic stylings, all wrapped around powerful choruses that compel the listener to sing along at the top of their lungs with fists held high in the air.

Says Ross: "We have been working on this record for quite a while now and it feels like the perfect time to get this out and give the people a kick-ass heavy metal record. It almost seems like it was meant to be that the album comes out during this time period because people could use this uplifting rock and roll to put some positive energy back into their lives."

Adds Stu: "We all worked really hard on this thing and I am really happy with how it sounds. All the people that helped me with the production really came through, especially Maor Applebaum, who mastered it."

States Sean: "Making an album always is fun and you look forward to the fans' reaction to it, of course, but I really look forward to performing some of these ripping, speed screamers live on stage with the guys — and my new bandmate Mike LePond."

DEATH DEALER has compiled an insane variety of pre-order packages, dubbed "Ultimate Conqueror Paks", that have combinations of unique digipak, colored vinyl, and merch configurations. The label Steel Cartel has become well known for offering exotic arrangements of unique merchandise products for the fans at value-rich price points. This go-around, they have a stunning, 3-D lenticular print of the cover art by Dusan Markovic included, among other killer items.

"I always look forward to working with Sean Peck on album art," says Dusan. "He always brings a fresh idea to the table and pushes me in new directions I don't normally go. The 'Conquered Lands' cover was fun because I do not do a lot of Egyptian themes and this cover came out great."

Stu stated about the mixing and mastering partners he engaged: "Chris made some amazing things happen to the mix and sound of the instruments and what can you say about Maor? He is the best in the business right now. There is no reason to look for anyone else. He has always been a big supporter too, which is great."

Only three tracks will reach the streaming platforms for the foreseeable future. This is an "old-school campaign" directed at the true metal supporters and long-term fan engagement.

DEATH DEALER will support the new release with touring and festival appearances in the coming months. 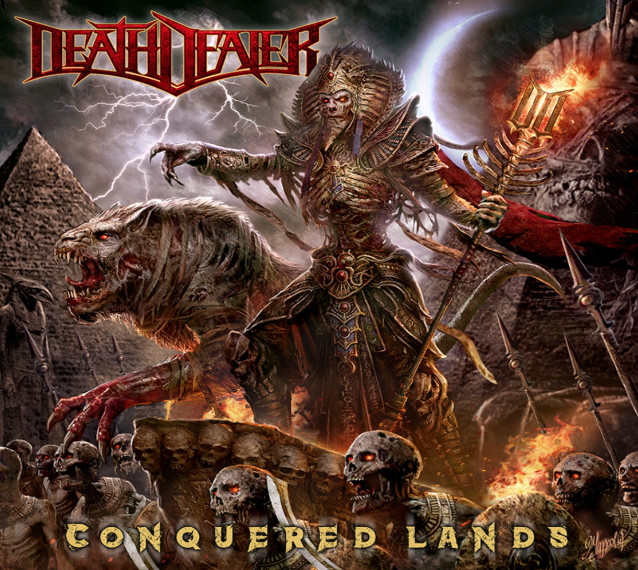