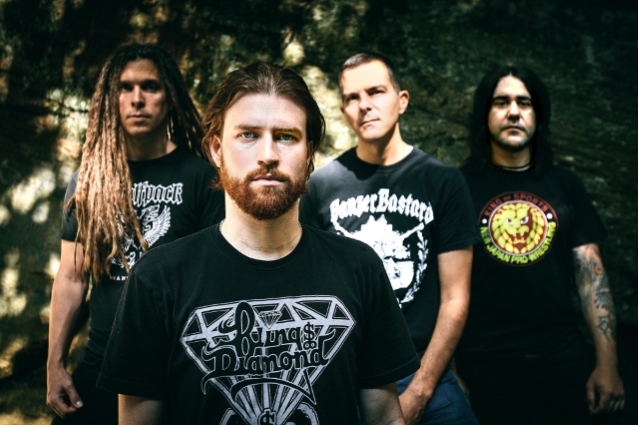 Massachusetts old-school hardcore band DEATH RAY VISION — which features in its ranks KILLSWITCH ENGAGE bassist Mike D'Antonio — has released a music video for the song "Just Let It Die". The wildly raucous and entertaining clip sees the bandmembers getting their asses kicked by pro wrestlers inside the ring.

"The video was a blast to make," said guitarist Pete Cortese. It has an old-school BEASTIE BOYS vibe, which is in stark contrast to the 'get on with the apocalypse already' lyrical theme. It's almost as if God wanted us to get our asses beat by semi-pro wrestlers."

Stepping into the ring for "Just Let It Die", which was filmed at The XWA Event Center in Warwick, Rhode Island, are pro-wrestlers Marty The Moth, John Steele, King Leòn the 6th, Moshpit and Buff Dad.

"There's just something magical about watching your doppelganger as he's being pummeled to death," said guitarist Chris Rosati. "This shoot was honestly some of the most fun I've had in this band to date. We got to drink beer and watch live wrestling all day long. I mean, c'mon… Does it get any better than THAT?"

"It's a playful jab at the hardcore scene, in a way," D'Antonio said about the album title. "There's a lot of people who preach a 'positive mental attitude' and they practice anything but that." The title also succinctly represents the band's current direction which deviates from their previous "go old-school or go home" approach. "We don't really have a lot of good moods on this one," Cortese continued. "It's a little more morose, melodic, and to say that it will be 'our finest work to date' would be a little too positive for the angle we're going for."

DEATH RAY VISION wrapped up 2018 with a U.S. tour with KILLSWITCH ENGAGE, BORN OF OSIRIS and CROWBAR.

The group will next perform at the Providence Tattoo And Music Festival with TRAPT and SALIVA in March, and embark on a short tour with INTO ANOTHER and BEYOND later that month.