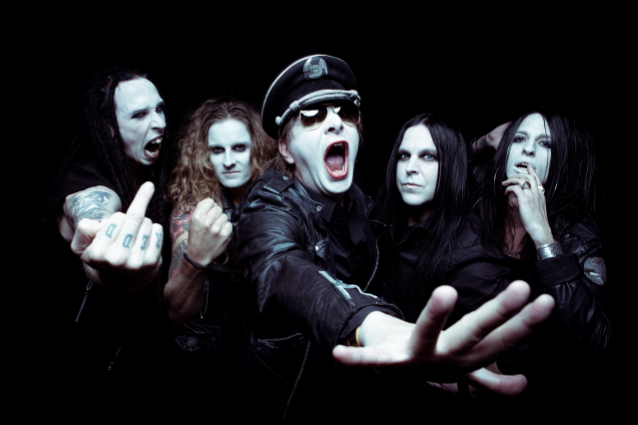 DEATHSTARS: New Album Pushed Back To The Fall

After a four-year live absence, the death-glam sensations returned to the stage last summer, playing some of the world's biggest festivals, and now they plan to come back with their European tour in the fall.

Due to delays with their upcoming album recording process, the band has been forced to call off the spring dates. All tickets purchased will be vaild for the new shows.

Stated vocalist Andreas "Whiplasher Bernadotte" Bergh: "We regret to inform you this, but because of family matters and a complex period of personal responsibilities, the new DEATHSTARS album will be released post-summer 2020 — instead of late spring — and tour will commence just after.

"Sometimes darkness isn't ready for the chaos of reality. But when the dark does what the dark does best — it's darkness, even in autumn 2020. Get ready!"

Last year, DEATHSTARS were reunited with guitarist Cat Casino, a key character in the group's history.

Cat, who had, in recent years, been writing, producing and playing lead guitar for Hank Von Helvete (ex-TURBONEGRO),originally joined DEATHSTARS for the "Termination Bliss" tours in 2006, but left after the excessive touring in 2011 and 2012 because of personal reasons.