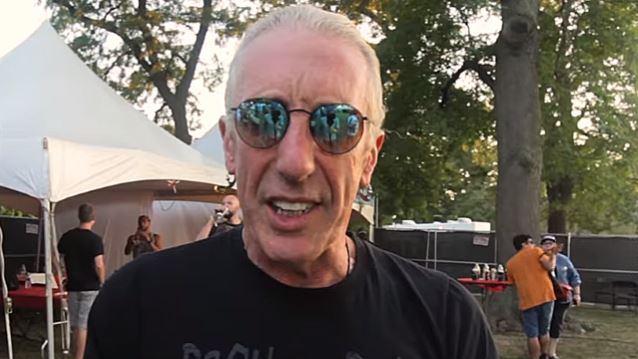 Dee Snider has apologized to CANNIBAL CORPSE for saying that he threw the band's first album in the trash because "it was being vulgar and disgusting just for shock value."

The TWISTED SISTER frontman made his comments during a discussion with Noisey about censorship. The musician, who in 1985 found himself giving testimony to the United States Senate's Committee On Commerce in a congressional hearing on "record labeling," said: I have been in radio for 25 years, and I once threw a record into the garbage: CANNIBAL CORPSE's first record. I was disgusted, because, to me, it wasn't being artistic in any way. It was being vulgar and disgusting just for shock value. You talk about fucking a nun in the ass with a knife, it was literally — that was one of the songs!" He continued: "I was reading the lyrics, and you know, I'm an artist, I'm for creativity, for exploration, give me something to say that this is your artistic statement, but when you're just writing down the most despicable things you could possibly think of for the sake of shock, well, that, to me, isn't art. So, is that too far? That's too far."

Former CANNIBAL CORPSE frontman Chris Barnes, who sang on the band's 1990 debut "Eaten Back To Life", took offense to Snider's comments and called out the TWISTED SISTER vocalist in a since-deleted tweet for not stating his opinion to Chris's face when they met on a previous occasion. Dee responded on Twitter (edited for clarity): "Fair enough, Chris. I talked shit about your band, you talk shit about me. Quid pro quo." Barnes then came back with: "It was just kinda dicked out to say that, Dee" and "I've been a fan since '84 and to hear that you were so judgmental to throw our CD in the trash. Dude, you stood up against censorship."

Barnes's words were apparently enough to make Dee see the error of his ways, because Snider then tweeted: "I apologize to [Chris Barnes] and CANNIBAL CORPSE for what I said. [I] could have made my point without it. As Chris said, 'It was a dick move.'"

Clearly satisfied with Dee's response, Barnes tweeted: "I love you, Dee! Thank you. Sorry I was so harsh. You're a hero of mine#YouCantStopRockAndRoll"

In a 2012 interview with Invisible Oranges, CANNIBAL CORPSE bassist Alex Webster stated about the band's lyrical approach: "We've really tried hard to make our songs serious horror songs. But the ones that have the more extreme gore in them, those lyrics sometimes make the audience realize there's a bit of black humor to it, much in the way 'Evil Dead' or 'Evil Dead II' did. Those movies were meant to be frightening, for sure. But it takes some of the scare out of it because they were so over the top."

He continued: "None of our songs are written to be intentionally humorous or anything like that, but I think when you're describing something that bloody considering the context: it's coming from a band. It's coming from a band and you're enjoying the music and you're reading the lyrics that's describing something completely atrocious, you know, and people aren't going to take it particularly seriously. When it's something a little darker… it's strange, but if you edge off the gore a little, the song becomes more frightening.

"I would say CANNIBAL CORPSE has a little bit of 'Evil Dead' to it, but we have more serious horror songs too. Not that any of them were intentionally not serious. But when you edge the gore back a little bit and leave something to the listener's imagination, you can wind up with something scarier. That's the same way with horror movies, I think. The movies that I found to be the most frightening weren't particularly graphic, as far as violence goes. 'The Exorcist', 'The Shining' — they're two of my favourite horror movies but they weren't particularly violent. 'Burnt Offerings', 'The Sentinel'. There's a number of dark, frightening movies that I really like and they aren't that gory at all. Some of our songs are 'Evil Dead'-like, but we have songs that are more like 'The Shining'."

@sixfeetofficial Fair enough Chris. I talked shit about your band, you talk shit about me. Quid pro quo.

It was just kinda dicked out to say that Dee https://t.co/A8dmF8gFmC

I apologize to @sixfeetofficial & @CorpseOfficial for what I said. Could have made my point without it. As Chris said, "It was a dick move."

I love you Dee! thank you, sorry I was so harsh. You're a hero of mine#YouCantStopRockAndRollhttps://t.co/R6g0djCD36