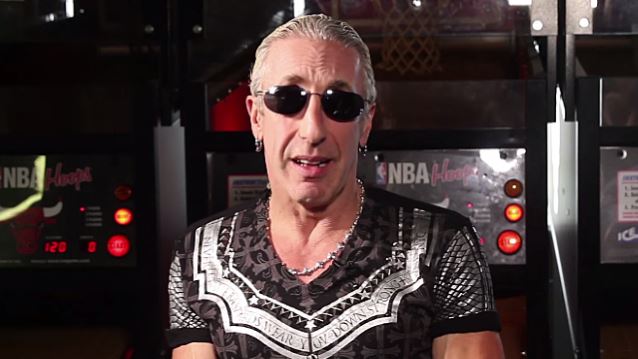 TWISTED SISTER frontman Dee Snider has apologized to former WHITESNAKE and DIO guitarist Doug Aldrich for "singling him out" by questioning the relevance of any of the WHITESNAKE releases Aldrich appeared on.

On February 9, Snider posed the following question for his 124,000 Twitter followers: "What WHITESNAKE album of importance did Douglas Aldrich play on? I'm just sayin'." He added in a separate tweet: "I'm tired of musicians who joined famous bands after their heyday claiming they are from those bands. They had NOTHING to do with success!"

A short time later, Aldrich responded with the following tweet: "Dee Snider, dude, I just did my best to keep the band moving forward. Was blessed to compose 30 tunes. You are a total jackass though. Haha!"

During an appearance on the March 9 edition of Eddie Trunk's SiriusXM satellite radio show, "Eddie Trunk Live", Snider explained in depth his reasons for calling out Aldrich. He said: "It's because I'm [living] in [Las] Vegas [right now] that this whole incident, for lack of a better word, was triggered.

"First and foremost, I did this already on Twitter, and I'm gonna do it again. First, I wanna say, I apologize to Doug Aldrich. I should not have singled him out in this issue that I'm gonna talk about. Singling him out was unfair and it was wrong. And I apologized on Twitter, and he acknowledged it. I'm apologizing nationally, internationally… whatever.

"But the reason… What happened was, I was in Vegas and I was driving down the Las Vegas Boulevard, and I saw a sign for [the 'Raiding The Rock Vault'] show… And what I'm gonna try to is not single out people individually. Okay? But I have to explain the Doug Aldrich tweet that got so much coverage in the rock press; I couldn't believe it. And I saw the sign, and it said that this show now had Doug Aldrich from WHITESNAKE. And I said… 'Doug Aldrich?' I've met Doug, I know he played with WHITESNAKE. I'm going, 'From WHITESNAKE?' This show proclaims they have all these great people from these great bands. And I said, 'Now I know [former WHITESNAKE members] Bernie Marsden, Micky Moody, John Sykes, Adrian Vandenberg, Steve Vai, Vivian Campbell…' I've toured with WHITESNAKE. I know these people. Doug Aldrich… That came in, like, 2008! And to claim that he was from WHITESNAKE, I felt, was… It really irked me. And that's why I did that. I tweeted, 'What important [WHITESNAKE] record did he play on?'"

"I know that Doug plays with WHITESNAKE. And that's the operative word.

"You know Al Pitrelli [MEGADETH, SAVATAGE, TRANS-SIBERIAN ORCHESTRA]. And you know Joel Hoekstra [NIGHT RANGER, WHITESNAKE]. Al and Joel, like Doug, [are] great guitar players. When I say to Joel, 'What are you doing now?' Joel said… This was a few years ago when I first ran into him when we were doing 'Rock Of Ages' together. He said, 'I'm playing with NIGHT RANGER.' Operative word being 'I'm playing with.' I see Al Pitrelli and I say, 'What are you doing now, Al?' he goes, 'I'm playing with ASIA.' Or, 'I'm playing with MEGADETH.' He never said to me, 'I'm inMEGADETH,' or, 'I'm a member of MEGADETH.' He knows full well that Marty [Friedman] is the guitar player everybody knows from the heyday of MEGADETH. He's a paid… This is Al Pitrelli… A paid sideman. He's on salary. He's not a bandmember. None of these guys are bandmembers."

Snider added: "It's something I'm very passionate about, and that's why I got upset.

"[To claim that these musicians were members of those bands is] misleading to the public, and it's unfair to the public, it's unfair to the artist. I mean, to say they 'played with,' that's fine, but the illusion that, when people say, 'I'm inGUNS N' ROSES.' And there are guys today who are inGUNS N' ROSES? Dude, you're not in GUNS N' ROSES. You're playing with Axl Rose. The people who were GUNS N' ROSES, again, they stood on Sunset Boulevard, they sold tickets to pay-to-play shows. Those are the original members of GUNS N' ROSES. The guys we know, the guys the audience appreciates, the guys that made the music, wrote the music that people love. And it just… it irks me, because so many of these guys are just forgotten. The guys that were in the band, and they die or fade away with nothing left. Somebody else has stepped into their shoes and is playing their solos, singing their parts, and they're forgotten. And it breaks my heart."

Dee went on to admit that he made a mistake when he cited Aldrich as an example of a musician who was wrongfully claiming to have been a member of formerly mega-successful rock band. But he said: "Fair enough, there are guys out there like Doug, who have been in these bands for years. Fair enough… It's not black and white. And there are so many guys… But I'm sorry, man. I'm sorry. If you're hired [to play in] a band after their heyday, I don't care if you played with them for three decades…"

He continued: "I hope there are people listening to what I'm saying. 'Cause I'm not… I kind of pride myself on being fair and recognizing my own… I called myself an asshole on Twitter, recognizing that… Well, Doug called me an asshole, and I hashtagged 'asshole.' You know what I mean? And I'm fair and I'm honest. I'm gonna say it's not black and white.'"

Snider also weighed in on the current lineup of KISS, which features guitarist Tommy Thayer and longtime drummer Eric Singer dressing up as Peter Criss' and Ace Frehley's respective "Spaceman" and "Catman" personas. He said: "I don't understand how people could accept this. Tommy Thayer, I'm sorry, it's insulting. Not only did he play in a [KISS] tribute band, he's imitating Ace. His entire act is an Ace imitation."

"I often tell the producer [of my radio show], 'Why can't we play something — even a taste of something — new?' 'Cause people are interested. But we don't. And there's a reason for it. Because these are the defining records, these are the defining musicians, this is the music of these people's lives, and that's what my show gives to them. Again, I'm not the producer, but this is what we give to them."

Aldrich left WHITESNAKE in May 2014, explaining in a statement that he "had several recording and live commitments, so [he] needed a more flexible schedule to conclude these before going full force as normal." He added: "Unfortunately, my schedule was not workable."

Aldrich played on the last two WHITESNAKE studio albums, 2008's "Good To Be Bad" and 2011's "Forevermore", and appeared on several live releases, including 2013's "Made In Japan" and "Made In Britain/The World Records".