DEE SNIDER Says He Has 'No Financial Interest' In TWISTED SISTER Copyright Case: 'I Sold My Catalog Years Ago'

Dee Snider says that he has "no financial interest" in the copyright case involving Australian politician Clive Palmer and TWISTED SISTER's classic song "We're Not Gonna Take It".

On Friday (April 30),Palmer was ordered on Friday to pay Universal Music more than $1 million for using "We're Not Gonna Take It" in his party's advertising.

Several hours after the judgment was announced, Snider, who had testified the use of his hit in a political ad campaign was "not good for my heavy metal image," took to his Twitter to write: "I have no financial interest in this settlement. Never did. Like many artists I sold my catalog years ago (for a fortune). I fought this fight to defend my creation & to stand up against bullies for every creative who's ever been shit on & hasn't been in the position to fight."

In 2015, Snider sold his Snidest Music music publishing catalog of 69 songs — including "We're Not Gonna Take It" and another classic TWISTED SISTER rock anthem, "I Wanna Rock" — to Universal Music Publishing Group (UMPG) for what he later said was "a lot of money."

The songs in the catalog have been featured in numerous national commercials, films, television and the Broadway musical "Rock Of Ages", which had a three-year residency at the Venetian and then a one-year residency at Rio All-Suite Hotel & Casino in Las Vegas until January 2017.

In a January 2018 interview with SiriusXM's Eddie Trunk, Snider described how his deal with UMPG was set up. "They look at its annual income, and then they offer you multiple — say, 'We will give you seven years, 10 years, 14 years…'" he said. "This is the negotiation. And the appeal of that is when you're in — this isn't bragging; rich rock star. Sorry. I mean, I've worked hard for that. But you're in your 40-, 50-percent tax bracket. The money that you get each year goes in there. When you sell it, you sell it as a capital gain. So you're only paying 20 percent instead of 50 percent. So you get a multiple of 10, 12 years, then you're only gonna pay 20-percent tax on the money instead of paying nearly half of it. And you sort of weigh it up and you look at your life expectancy. Plus, you can say [about] a song, 'Oh, I expect it to do good forever.' But, you know, it may; it may not. You have up years, you have down years. If you take the money, you can invest it. And so now you've got an actual almost set income stream coming from your investment, and you're paying much less taxes. So there's a reason to do it at a certain point in your career. The time not to do it is when you're in your 20s. The time to do it is when you're retirement age."

Snider went on to say that he is now glad he didn't got an offer for the catalog a couple of decades ago when he really needed the money. "I bottomed out in the '90s; I was dead broke," he said. "If I had been made an offer for anything, for nothing, I would have sold. [But] there was zero interest — zero. [That stuff was thought of as] buried and over. No one saw it coming back. Metal was a dirty word. You couldn't touch my catalog with a 10-foot pole — thankfully, because I would have [done it for] pennies [on the dollar]. Because I was broke."

Universal Music, which acquired publishing rights to "We're Not Gonna Take It" from Snider in 2015, filed a copyright infringement lawsuit against Palmer in February 2020.

During the trial, Palmer accused TWISTED SISTER of "swindling its hit song from a famous Christmas carol." Snider had previously admitted that glam rock band SLADE and "O Come, All Ye Faithful" were influences while he was writing "We're Not Gonna Take It".

Palmer's attorney played a mashup of "O Come, All Ye Faithful" and "We're Not Gonna Take It", performed during a live Christmas concert in Chicago, which was featured in the 2014 stage musical "Dee Snider's Rock & Roll Christmas Tale".

Snider said the two songs were "rhythmically different, and that is inspiration not duplication." He added the songs had to be "shoehorned" together to create the versions used in his musical and the 2006 cover. "It was very difficult," he said.

Universal attorney Patrick Flynn told the court that Palmer had balked at paying a $150,000 copyright fee to use the song, instead offering just $35,000.

Along with having to pay AUS$1.5 million in damages, Palmer has also been ordered to cover legal costs and to remove all copies of his song and video from the Internet.

Snider celebrated the win, tweeting: "HALLELUJAH!! Just found out that the copyright infringement of 'We're Not Gonna Take It' by 'politician' Clive Palmer in Australia has been decided MAJORLY in favor of myself as writer and @UMG as publishers! WE'RE NOT GONNA TAKE COPYRIGHT INFRINGEMENT ANY MORE!!"

I have no financial interest in this settlement. Never did. Like many artists I sold my catalog years ago (for a fortune). I fought this fight to defend my creation & to stand up against bullies for every creative who's ever been shit on & hasn't been in the position to fight. https://t.co/8sVMChGyHm 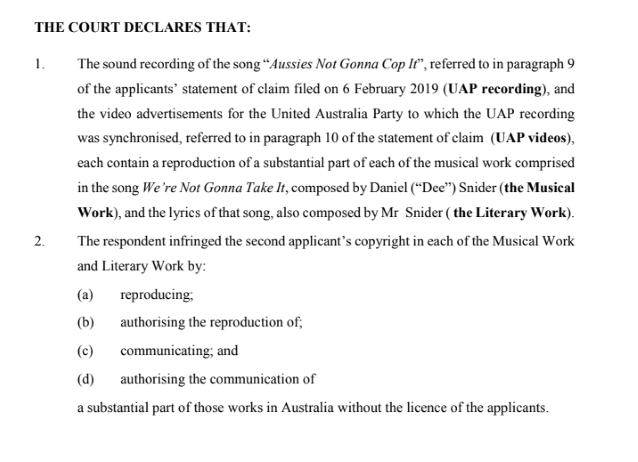 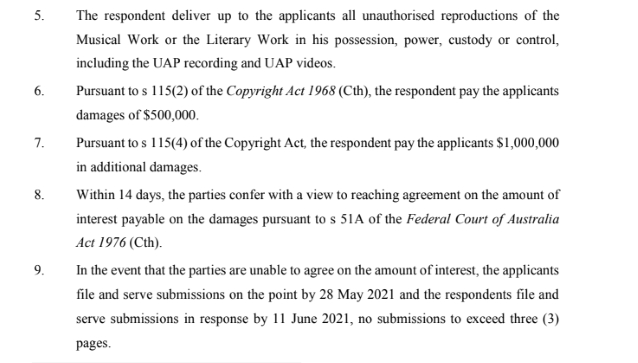