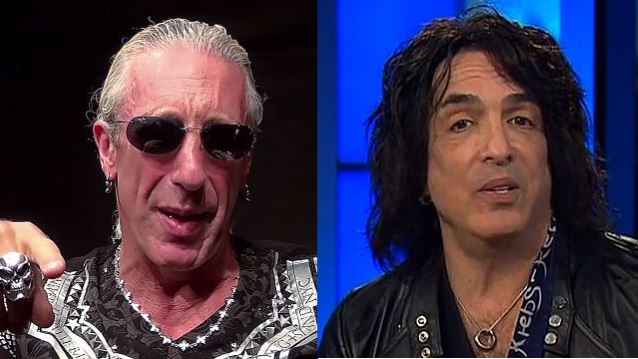 DEE SNIDER To PAUL STANLEY: 'For Some Reason, You Are Oddly Threatened By Me'

Dee Snider has responded to Paul Stanley's rant against the TWISTED SISTER frontman, saying that he would "bury" the KISS leader in a hypothetical "rock" battle.

During a recent appearance on Eddie Trunk's show, Snider criticized Stanley and KISS bassist Gene Simmons for having current KISS members Tommy Thayer and Eric Singer dress up as Peter Criss's and Ace Frehley's respective "Spaceman" and "Catman" personas. Dee told Trunk: "I don't see how people could accept this. Tommy Thayer? I'm sorry. It's insulting. Not only did he play in a tribute band of KISS, he's imitating Ace in his entire act!" Snider went on to bash Thayer for allegedly copying Ace's stage moves. He said: "Oh my God — that's disgraceful. When KISS replaced Ace and Peter, and they brought in guys [Eric Carr and Vinnie Vincent] who had their own makeup and their own thing, that was acceptable. That was awesome. They were their own characters."

"First off, thanks for giving me the attention I — as you noted — so desperately wanted.
Now, I've always had nothing but respect for your band, and you as a performer, but it really comes as no surprise that the feeling isn't mutual. For some reason, you are oddly threatened by me. This said, your recent comments about my band and I on Chris Jericho's podcast was a typical diversionary tactic used in an attempt to change the subject, rather than answer the actual accusation or question. It's the oldest interviewing trick in the book.

"As far as my 'whole band being a bunch of buffoons' goes, that's a pretty ironic statement coming from you. The argument could easily be made that KISS is the 'king of the buffoons,' so in an odd way you've paid TWISTED SISTER quite a compliment. It takes one to know one.

"Lastly, on the subject of me being a 'wannabe'? Do you really think so? Well then…any time, any stage. But let's do this old school — no costumes, no pyro, no bullshit — let's just get up there and rock. I will bury you, son.

"P.S.: Did I mention that I'm clean, sober, razor sharp and fully capable of defending myself from any kind of lame attack? Just ask Al Gore."