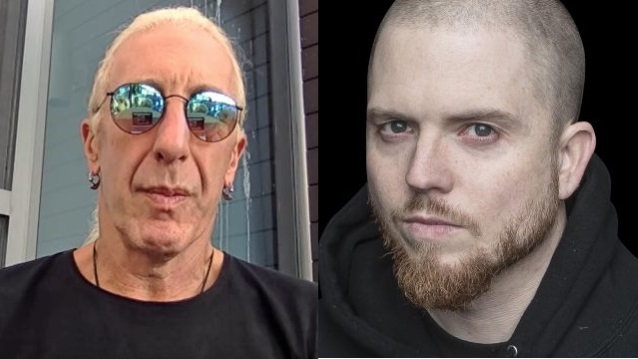 TWISTED SISTER frontman Dee Snider is currently in the studio working on a new solo album, which is being produced by HATEBREED vocalist Jamey Jasta. The as-yet-untitled disc is due out in the spring.

Earlier this week, Jasta posted a clip on Instagram of Snider tracking vocals at an East Coast recording studio. He also recently revealed on Twitter that former KILLSWITCH ENGAGE and current LIGHT THE TORCH frontman Howard Jones will contribute to the album.

In an interview with Poughkeepsie radio station 101.5 WPDH on October 31, Snider discussed how his pairing with Jasta came to be. "I decided to do a very aggressive metal record — a true metal record. I start recording the album today for release next spring," he said. "Jamey is a fan of mine, and I was on his podcast, and he literally challenged me on the air. He said, 'Dude, you're iconic. I think you need to do a true metal record. Think Rob Halford's 'Resurrection', think in that direction. I go, 'Well, what do you got in mind?' He goes, 'Dude, I will produce it, and I've got songs, and I've got people stumbling over each other to write a song for Dee Snider.' Then he just started sending me music. The new stuff is powerful; it's great; and I'm excited about the next tour, which will start next spring."

Snider's last solo album, "We Are The Ones", was released in October 2016 via Red River Records (distributed by BFD/RED). Produced by Damon Ranger, the disc was described by Dee as "an album that is think part FOO FIGHTERS, part IMAGINE DRAGONS, part THIRTY SECONDS TO MARS." He added: "Forget anything from the past. Most of my heavy metal fans are gonna hate it; I've abandoned my past to move forward."

Snider told NorthJersey.com last month that he is "working on so many different projects from a writer-producer standpoint" that every time he performs is a special occasion. "I'm not that guy coming around every six months or every year," he said. "For all we know it could be the last time."

"I just closed a deal to do a children's animated cartoon aimed for four-to-seven-year-olds, and I have two other TV shows being shopped," Dee revealed. "I've got a horror movie that I've got backing for, another movie I'm shopping, a musical that I'm converting into a script and a Vegas show I'm working on. I can't remember the last time I was ever bored."