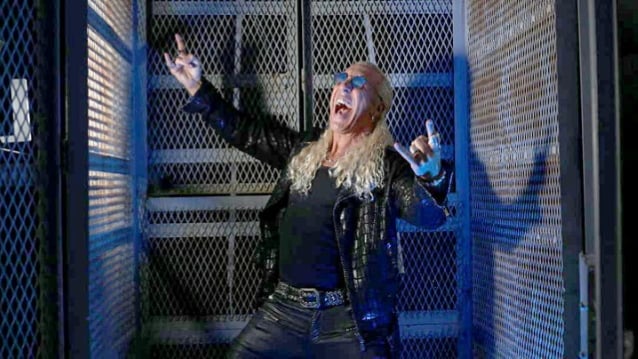 TWISTED SISTER singer Dee Snider will perform at Stereo Garden in Patchogue, New York to a limited-capacity crowd on June 11. According to Dee, the capacity for the concert, which will be filmed for a future release, will be limited to 200 vaccinated or tested people due to COVID-19 restrictions. However, those unable to attend will get a chance to watch it in the near future.

Tickets ($40-$75) for the show are available via Eventbrite. A portion of the proceeds will be donated to Melissa's Wish, a not-for-profit organization founded with the purpose of providing short term, non-medical financial aid, in the form of a grant, to the caregivers assisting those afflicted with a serious illness, injury or end of life event.

As previously reported, Napalm Records has set a July 30 release date for Snider's upcoming solo album, "Leave A Scar". The follow-up to "For The Love Of Metal" was once again produced by HATEBREED vocalist Jamey Jasta and will include a duet with CANNIBAL CORPSE frontman George "Corpsegrinder" Fisher.

This past March, Snider told New York's Q104.3 radio station that his new LP will be "very heavy," but added that "there are some surprises on there that I think people are gonna really be excited about."

Snider previously spoke about his upcoming solo LP during an October 2020 interview with Full Metal Jackie's nationally syndicated radio show. At the time, he said: "[I'm] working with the same amazing team — the Bellmore brothers, Charlie [on guitar] and Nickey. Nickey plays drums, but also is the engineer and mixer — an amazing, talented guy. And Jamey Jasta is the producer and curator. He is the gatekeeper, the master. As all ideas are brought in, they're filtered through Jamey, his ears, and have to get a thumbs-up from him before it makes it to the record. But now we no longer have to do that 'Is this gonna work?' thing. And for me, it's, 'Do I trust these guys?' I mean, I trusted them in the sense that they were friends, but when Jamey challenged me to do the metal record, I had my doubts. I don't wanna say it's doubts, but [I thought], 'How is this gonna work?' So there was an initial thing where we were all feeling each other out. Now, after two years of working together, touring with the Bellmore brothers, locking in a band with Nick 'Taz' Petrino on guitar and Russ Pizzuto on bass guitar, we come in and we don't have to waste any time with that. There is trust, we do know our direction, we do know what works for Dee Snider and for this project, and we just go full steam ahead."

Snider's latest release was "For The Love Of Metal Live!", which came out in July 2020 via Napalm Records. The DVD/Blu-ray and accompanying live album (available in various formats) features audio captured from several Snider festival performances worldwide — from the United States to Europe, Australia and beyond. In addition to tracks from Snider's solo catalog, like "I Am The Hurricane" and "For The Love Of Metal", TWISTED SISTER favorites such as "I Wanna Rock" and "We're Not Gonna Take It", and even a cover of AC/DC's "Highway To Hell", the audio portion of "For The Love Of Metal Live!" also features a brand new original studio track, "Prove Me Wrong".

Don't wait to get your tickets. As of now they are limited to 200 vaccinated or tested people. With any luck they will release more tickets as the date gets closer. https://t.co/yqHBRSghOt