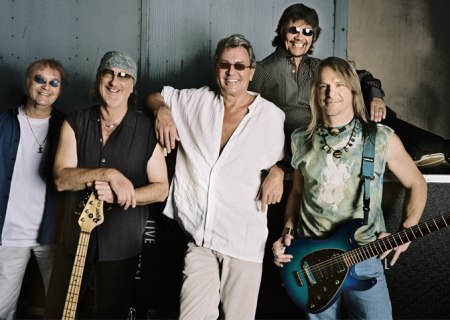 DEEP PURPLE has announced its first tour in North America in four years. The pioneering rock band — featuring classic members Ian Gillan (lead vocals),Roger Glover (bass) and Ian Paice (drums, percussion — will perform for the first time in the U.S. and Canada with a symphony orchestra in each city (except San Francisco). Launching June 3 and wrapping June 25, the tour is called "Deep Purple: The Songs That Built Rock", with stops in New York (two nights at the Beacon Theatre),Los Angeles (Greek Theater) and Montreal (Bell Centre).

Fans can expect to hear the band’s trail-blazing iconic hits — including "Smoke On The Water", "Highway Star", "Hush" and "Space Truckin'" — plus other favorites achieve a new dimension of sound with the added heft of a symphony orchestra. In other parts of the world, DEEP PURPLE has achieved acclaim for its live epic presentation of symphonic rock.

As they eye a new studio album for release in 2012, DEEP PURPLE continues to tour around the world. The band, rounded out by Steve Morse (guitar) and Don Airey (keyboards),recently launched (March 18-27) their eighth visit to Russia, a country where the group made early inroads as a touring act and where they’ve played at the personal request of the country’s president Dmitry Medvedev. They performed in three cities — Ekaterinburg, St. Petersburg and Moscow — before moving on to Kiev (Ukraine) and Minsk (Belarus). The band also has nine more shows on tap — Heraklion, Greece (May 6),Limassol, Cyprus (May 8),Ceasarea, Israel (May 14, 15),Istanbul, Turkey (May 18),Athens, Greece (May 20),Patras, Greece (May 21),Thessaloniki, Greece (May 23) and Ioannina, Greece (May 25) — before heading to North America.

Throughout its career, DEEP PURPLE has sold over 100 million albums worldwide and has incorporated classical music, blues-rock, pop and progressive rock.

Although the band’s devoted fans treasure the group's live album "Concerto for Group and Orchestra", the upcoming tour of North America will not draw from this work.

When asked during a February 22, 2011 press conference in Mexico City if there are any plans for DEEP PURPLE to record a new studio album soon, the band's vocalist, Ian Gillan, replied, "I guess it's about time, isn't it?! So we're gonna get together and have a writing session quite soon. And if we get excited, then we'll probably have another [album finished and ready for release] shortly after that. We'll see how it goes. But there's no plans. But I think we're getting poked by various connections who would like to see another DEEP PURPLE record. So I think it's about time."

DEEP PURPLE released a live album last year called "Space Truckin' Round the World Live 68-76". The two-disc set features rare live recordings from various concerts all over the world, including gigs in Tokyo, Paris and San Diego. The compilation, which features multiple band lineups, also features a detailed history of the group, individual concert details and photos. It was released as part of the 10th anniversary of Purple Records — the label that handles the band's music.

DEEP PURPLE's 18th studio album, "Rapture of the Deep", was released in November 2005. It is the fourth studio CD from DEEP PURPLE since guitarist Steve Morse joined the band in 1994. It was also the second album to feature veteran keyboardist Don Airey.

"Rapture of the Deep" was produced by Mike Bradford, who also worked on the band's previous release, 2003's "Bananas".