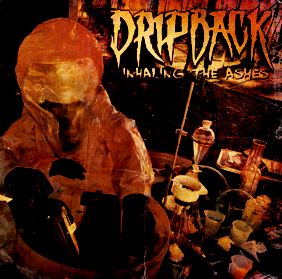 DRIPBACK, the new U.K.-based hardcore/metal band featuring members of LABRAT and TED MAUL, will release its debut EP, "Inhaling The Ashes", on June 6 via Siege Of Amida Records.

Born from a basic desire to have an excuse to hang out more often with close friends, TED MAUL guitarist Luca Gdrax invited ex-bandmate, drummer Hellhog (currently of PURE NEGATIVE),ex-LABRAT bass wizard Adam Da Rat and the toxic duo of RIVER FRESHNEY's Lee4 (guitars) and Wez4 (vocals) to start jamming. After a few months of rehearsals, it soon became apparent that what was being produced deserved more than the confines of a shitty rehearsal space in an industrial estate in West London, and the five set about refining what would become "Inhaling The Ashes".

Recorded in a 48-hour gap in extreme metal wonder-producer Russ Russell's busy schedule before Christmas, the end result is six tracks of some of the freshest-sounding hardcore metal this country has produced in recent years.

"It's so much fun to be thrashing out hardcore metal tunes in the vein of the bands we grew up with," says Luca, who has been gigging in various bands including AS SHE SCREAMS, INCARCERATED and TED MAUL since 1995. "ENTOMBED, BIOHAZARD, CRO-MAGS, just making a stress free environment to get demented and have some fun!"

"It feels GREAT to be playing again!" enthuses Adam Da Rat, who as well as touring the world with LABRAT, also did brief stints standing in for U.K. hardcore heroes STAMPIN' GROUND and NWOAHM champions GOD FORBID, as well as being the original bassplayer in TED MAUL. "It's so refreshing to be making music for music's sake," he continues. "There's no agenda here, no ambition, no 'Let's make this our jobs' type of thinking going on, and I think you can hear that in the tunes. It's just five guys who love heavy music making a racket with no idea where it will go afterwards. Putting it out on a proper label and going on tour with SOILENT GREEN is not something we planned, but it seems everyone that's heard DRIPBACK wants to help us out and get involved. I am very excited about this."

The band has posted two tracks for preview at www.dripback.co.uk.

DRIPBACK will be main support to SOILENT GREEN on a U.K. tour in May.