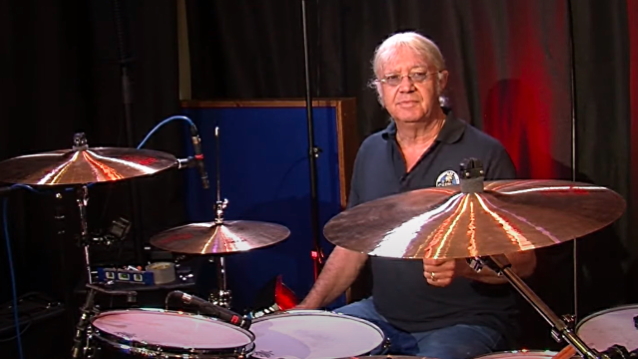 DEEP PURPLE drummer Ian Paice has paid tribute to Little Richard, who died on Saturday, May 9 at the age of 87.

Over the weekend, Paice released a four-minute video in which he reflected on the rock and roll pioneer. He said: "Saturday night, we lost probably the best rock and roll voice that's ever existed, from its inception to this very day. Little Richard left us.

"Over the years, I've seen those great innovators of rock and roll leave us for one reason or anything, whether it be from Elvis [Presley] through to Chuck Berry, and they all leave you a bit sad.

"When I heard Little Richard had gone, it really affected me. He was the creator of that great rock and roll concept. That voice, that band that he had created some of the best rock and roll songs ever. You listen to them today and the feeling and the groove and the swing of it and the power and aggression still comes through. And I was really affected by the fact that he's no longer with us.

"I had the great pleasure of meeting him in the early '70s. He was doing a show in a town where we were staying on a night off, and we got backstage to see him and paid homage. And he was wonderfully crazy. It was fun to be backstage and see how he actually was."

Little Richard, whose real name was Richard Wayne Penniman, died in Nashville with his brother and son by his side. His former agent Dick Alentold CNN the cause of death is related to bone cancer. He called the musician "one of the legends, the originators" and said Little Richard had "been ill for a good while."

In the early '50s, Little Richard Penniman combined the spirit of church music, the bawdiness of blues and the swing of New Orleans jazz and turned it into something altogether new, rock 'n' roll. When the Macon, Georgia native signed to Art Rupe's Specialty Records, Little Richard began to develop his signature sound and flamboyant persona. His legendary debut album, "Here's Little Richard" (1957),was a bold introduction to the artist, featuring the iconic tracks "Tutti Frutti" and "Long Tall Sally".