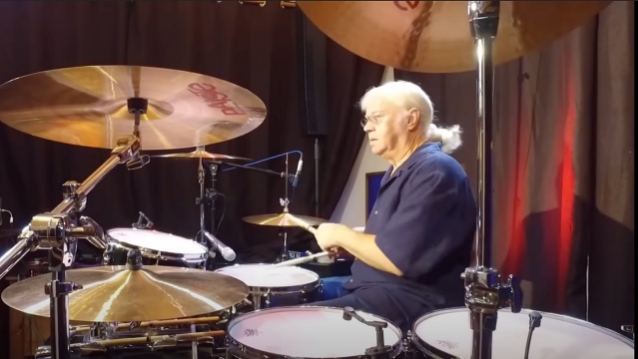 In the 17-minute video below, DEEP PURPLE drummer Ian Paice shares some of his personal practice footage and talks about how he gets ready for recording albums.

Some consider Paice to be the forefather of today's rock drumming. Such hits as "Space Truckin'", "Hush", "Fireball" and "Smoke On The Water" prove that Ian was helping create a genre that would last many years to come. In fact, throughout DEEP PURPLE's long career, which has seen numerous changes among the other personnel, he is the only drummer the band has ever had. When the group dissolved in 1976, Ian joined PURPLE vocalist David Coverdale to form WHITESNAKE. After a short hiatus, DEEP PURPLE reunited in 1984 for the "Perfect Strangers" release and has not stopped performing since.

In 2020, Paice was asked during a question-and-answer session with fans if he has ever felt the need to play double-bass drums. He responded: "Well, not really. The only time I ever really did it was on 'Fireball' because it added something to the track. The way the riff rolled along, it needed that power of two kicks.

DEEP PURPLE's latest studio effort, an album of covers titled "Turning To Crime", came out on November 26 via earMUSIC. The LP contains DEEP PURPLE's versions of great rock classics and musical jewels — including songs originally recorded by Bob Dylan, FLEETWOOD MAC, Bob Seger, CREAM and THE YARDBIRDS — carefully chosen by each member of the band.