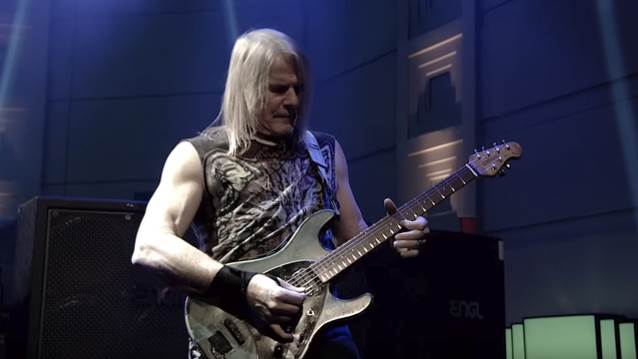 DEEP PURPLE's STEVE MORSE On Future Of Guitar: 'I Think It's Always Gonna Be Part Of Music'

DEEP PURPLE's Steve Morse has dismissed reports of the impending death of U.S. guitar business, saying that the instrument will "always" be part of music.

As more popular music has been made with computers, international guitar sales began to decline, creating a challenge for larger manufacturers and retailers like iconic brand Gibson, which filed for Chapter 11 bankruptcy protection earlier this year. According to The Washington Post, the other of the two biggest companies, Fender, is also in debt, and a third, PRS Guitars, had to cut staff and expand production of cheaper guitars.

Speaking to Australian Musician, Morse, founder of the DIXIE DREGS and THE STEVE MORSE BAND, and member of DEEP PURPLE, KANSAS and FLYING COLORS, said (see video below): "I think because, visually, every time you play the guitar, it's presented a hundred percent to the audience — there's nothing hidden… Like, with a keyboard player playing a Hammond, if you don't have the angles right, you just see a guy's head going like this [moving head from side to side] and a box. With a guitar, you see the whole thing. And there's so many different ways of playing the same note — different fingerings, different attacks, textures, vibrato. Because of that, I think it's very close to the human voice in terms of giving people their unique signature, their unique personality [and] sound. And because of that, it's not gonna go away. And what the big media tells us is the cool thing I don't think matters to guitar players. People that are in the audience will like it and will enjoy it. As long as somebody is playing with heart and soul; it'll come out through the fingers. So I think it's always gonna be part of music."

Morse has been lead guitarist for DEEP PURPLE since 1994, and his solo career has encompassed rock, country, funk, jazz, classical and fusion. Having started playing guitar around the age of 11, he later on attended University of Miami's School of Music, where he studied classical guitar and jazz. A "guitarist's guitarist", he was voted "Best Overall Guitarist" in the Guitar Player Readers Poll for five consecutive years, before being removed from eligibility to open the award to other musicians, and being inducted into their Gallery Of Greats. His work has received seven Grammy Award nominations, and he has appeared on over 200 albums.