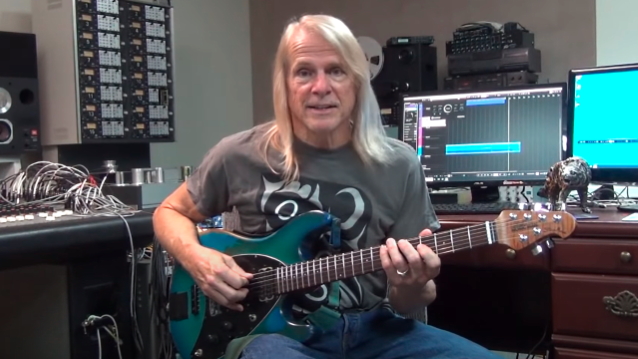 A video of DEEP PURPLE guitarist Steve Morse teaching you how to play the band's new single, "Man Alive", can be seen below. The track is taken from the band's upcoming album, "Whoosh!", which will be released on August 7 via earMUSIC.

"It's an abstract concept," frontman and lyricist Ian Gillan told Billboard about the song. "There was an apocalyptic quality to the (music of) 'Man Alive', and the idea developed lyrically from there — the scenario of this event that took place and everyone got killed, and you get this picture of 'all creatures great and small grazed on blood red soil, and grass that grows on city streets.' So it's a post-humanity scenario. And then all of a sudden something's washed up on the beach, and it turns out to be a man, and it's the only living man — but it's just a man, so...That's the end of humanity, because what use is one man? That was the idea. If it was a painting, you'd call it impressionistic."

DEEP PURPLE's 21st studio LP was once again helmed by Canadian producer Bob Ezrin (KISS, PINK FLOYD, ALICE COOPER),who also worked on the band's last two studio albums, 2017's "Infinite" and 2013's "Now What?!" Together they created the most versatile album in their collaboration. DEEP PURPLE "stretched out in all directions" without any limitation, letting their creativity go.

"DEEP PURPLE is putting the Deep back into Purple" was the half-joking motto in the studio after the first songs made it clear that Ezrin and PURPLE were on their path to creating an album pushing the boundaries of time, while voicing their resentment about the current situation of the world and addressing all generations.

"We've included everything that made the whole band smile, including Bob Ezrin. We've always enjoyed making music and having the incredible luxury of a loyal audience," said Morse.