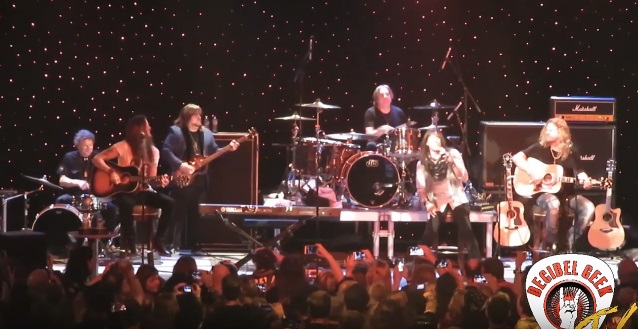 DEF LEPPARD drummer Rick Allen joined TESLA on stage at this year's Monsters Of Rock cruise to perform an acoustic version of the song "Little Suzi". Fan-filmed video footage of the performance can be seen below (courtesy of Decibel Geek TV).

TESLA singer Jeff Keith told Pollstar in a 2016 interview that the members of DEF LEPPARD are "like our big brothers."

TESLA's ninth full-length album, "Shock", which is tentatively due in the fall, was helmed by DEF LEPPARD guitarist Phil Collen. Collen previously co-wrote and produced the TESLA song "Save That Goodness", which was released in August 2016 and included on the "Mechanical Resonance Live!" album.

"Mechanical Resonance Live!" was made available in 2016 via Tesla Electric Company Recordings/Mailboat. The effort celebrated the 30th birthday of the original multi-platinum album and featured classic hits as well as the aforementioned "Save That Goodness" single.

TESLA will support STYX and JOAN JETT & THE BLACKHEARTS on a summer U.S. tour that kicks off May 30 in Irvine, California at the FivePoint Amphitheatre

Tesla the Band rocked!!!
Huge surprise was The Official Rick Allen of Def Leppard getting up and jamming with the boys...

Posted by Monsters of Rock Cruise on Wednesday, February 14, 2018