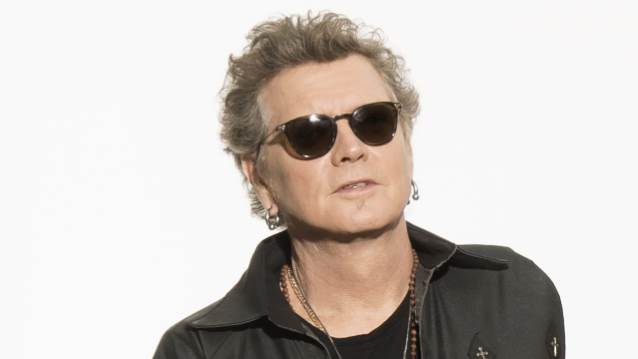 DEF LEPPARD drummer Rick Allen recently spoke with Rock Titan. The full conversation can be seen below. A few excerpts follow (as transcribed by BLABBERMOUTH.NET).

On touring with JOURNEY:

Rick: "I was just really excited, and especially the fact that we toured with them before. It was nice to see familiar faces. The sum total of two bands together like DEF LEPPARD and JOURNEY, it's just so much more when you put us together. You can tell people are having a fantastic time just basically hearing hit songs all night. It's such an honor to do this, it really is."

Rick: "Phil's been back for the last few shows. It's so nice to have him back, because we've been doing this for so long. We are eternally grateful to Steve Brown coming out and filling in like he did. It was great to be able to do that, but not quite the same. Now [that] Phil's back, everybody feels like we're back in the saddle. Everything's fine. He's got a beautiful son, so everything went really well."

On using a new drum kit during the tour:

Rick: "It plays slightly differently to the old setup, so that's been a little bit challenging. It's new software — it's all software-based technology. It just tracks a little better; there's less latency; the dynamic range is better; the sounds are better. I'm just sort of getting my head and my body around it, and it's working out really good. I get a good response from our sound engineer. I'm constantly listening to the crew guys just to get feedback on how the shows are going. We're in a constant mode of trying to improve what we do. I know that sounds strange after this many years, but there's always room for improvement. Some nights, we have great nights, and other nights, it's like, 'Where did that come from?' We've had off nights. It hovers around 98 percent, and then there's those nights when it's like you can't do anything wrong – it's just effortless. It's very elusive to play what I would call the perfect show. For anybody else listening, they'd be like, 'It was the same as last night – I didn't hear the difference,' but in my mind, I hear the nuances. I think it's a nice life lesson. In all the things that we do as human beings, we can always go back and do it again and get another chance. I love the fact that it's so focused out here — it's like night after night, constantly trying to get it right. I find that a really nice life lesson."

On his new line of luxury bags, BonSac:

On being an entrepreneur, artist and philanthropist in addition to a famous drummer:

On his "Legends" line of paintings:

Rick: "The first one I did was [late DEF LEPPARD guitarist] Steve Clark. I figured, 'If I'm going to do a legend, why not paint somebody that I dearly loved?' It turned out fantastic, to the point to where I really didn't want to let go of it. I wanted to keep it. But it's the nature of art — you start creating something, and you inevitably fall in love with it, and then sadly, you have to let go of it. I'm really proud of the 'Legends' series, and I hope to be doing more, but I'm busy with my day job at the moment. [Laughs]"

DEF LEPPARD's 58-city tour with JOURNEY kicked off on May 21 in Hartford, Connecticut and will run through October 6 in Los Angeles.