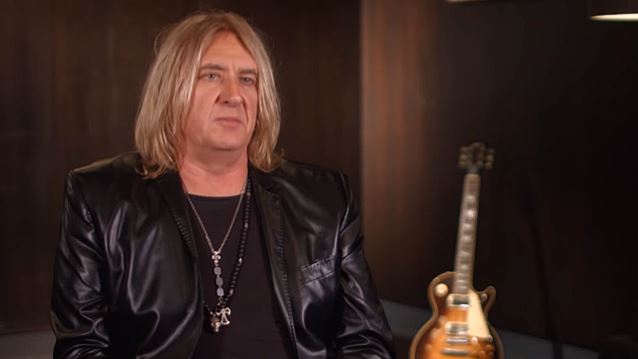 DEF LEPPARD frontman Joe Elliott has revealed to the Belfast Telegraph that he has been suffering from a bronchial spasm "for about nine weeks" while on the road in the U.S. with his band.

"It's when you've got a cough and all the doctors can't figure out why you have it," he said. "It's one of those random things, I just cough for no reason, but luckily I've managed to avoid it onstage."

He continued: "It was brought on, I believe, by the dust and gas emissions from when we played this biker festival. They literally line up their bikes and rev their engines while you play and when you've got 30,000 doing it you can imagine the kind of air you're breathing in. It can't be good for you. That, coupled with the fact the kind of singing I do is hardly gentle, so your throat gets a battering every night. Sometimes you just have to suck it up and get on with the show."

The 56-year-old singer also said that he considers himself very lucky to still be performing for DEF LEPPARD's millions of fans.

"I continue to be hopelessly in love with what I do," he said. "It's a privilege to be able to still go out and play for people. Especially considering that these days, with the music industry going belly up, you never know what’s around the corner. We've never stopped working though. Yeah, some of the radio hits dried up, but we never stopped making them. They just didn't get played. But that all seems to be coming back around again as ticket sales are showing there's an interest in the band that's much, much bigger than is being portrayed in some media."

DEF LEPPARD's new, self-titled album entered The Billboard 200 chart at position No. 10 with first-week sales of just over 30,000 units — nearly all from pure album sales.

"Def Leppard" was made available through earMUSIC worldwide (excluding North America, Japan) in the following formats: CD, 2LP gatefold, digital download and on all streaming services. The CD was written and recorded in three separate sessions over the course of the past year and a half.