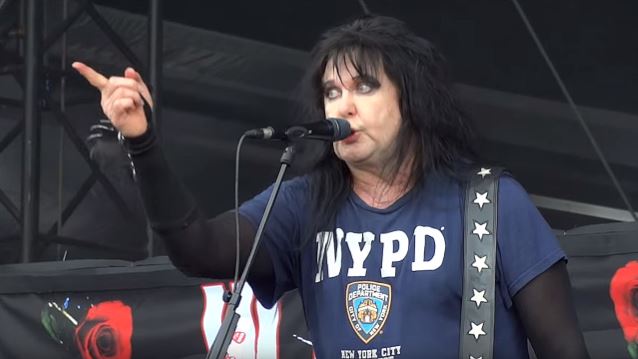 W.A.S.P.'s BLACKIE LAWLESS: It's Impossible That Any Men Could Have Written The Bible Without Divine Inspiration

In a brand new interview with Classic Rock magazine, W.A.S.P. frontman Blackie Lawless, who is a born-again Christian, was asked if his faith is entirely personal. He responded: "Absolutely. My faith centers on Jesus Christ and The Bible and nothing else. I don't want to know about anybody's opinion. If people want to talk about it, that's okay. But don't start interjecting what you think is your idea. If it cannot be substantiated by what's written in The Bible, I don't want to know about it."

He continued: "People say that with The Bible, you're dealing with a book that was written by men. That may be true, but you're also dealing with sixty-six books written by forty different authors spread over two thousand years over three different continents, and most of these guys did not know each other, yet you see them finishing each other's sentences. It's impossible that any men could have written this without divine inspiration."

Asked if has absolute certainty in all of this, Blackie said: "I had to answer this question for myself once and for all: Is it real? So I started digging deep in The Bible, and one day I realized: I'm reading the living word of the living God."

Lawless also talked about his decision to stop performing the W.A.S.P. song "Animal (Fuck Like A Beast)". He said: "At the time I came back to my faith, I said, 'That's it. I can't stand up on a stage and say this.' There's a verse in The Bible that says: 'Let no corrupt speech come from your mouth.' Between me and you and the fencepost, that song was put into my life for a reason — for me to create the fervor that it did with the PMRC and make the band a household name, and then for me to announce to the world that I would never play the song again."

He added: "I tell people now, the silence of it is deafening. It's worked like a charm."